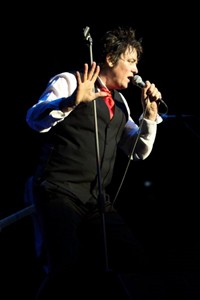 Angels frontman and Australian rock icon Doc Neeson is battling an aggressive brain tumour. Neeson, who turned 66 on January 4, was admitted to hospital over the Christmas/New Year period complaining of pins and needles, reports News.com.au.

Angels drummer Buzz Bidstrup said tests revealed the aggressive brain tumour. “On a scale of one to four it’s a four,” Bidstrup said. “But he’s incredibly stoic and accepting, he’s in great spirits. Doc’s looking at it as he’s one of the 20 per cent that can make it, which is the only attitude you can have.”

The Angels were due to start a national tour next month; Bidstrup said Neeson originally planned to honour the commitments and then embark on chemotherapy. “It was only two days ago he got a doctor’s report and sat down with his medical specialists team. They said he needed very, very aggressive treatment to get this thing under control and the last thing he needed was to be doing is jumping around in front of a rock band. He’s a remarkable fellow. I’m sorry to the fans we have to cancel the shows but I’m sure everyone understands why.”

Angels bass player Chris Bailey is also battling cancer in the jaw. “I guess you get to our age and this stuff happens,” Bidstrup said. “You never know what cards you’re going to be dealt.”

Doc Neeson’s former bandmates John and Rick Brewster and Chris Bailey said they were “deeply shocked and saddened” by the news. “We are thinking of all the good times we’ve had and the camaraderie that came with them, the hard work that we all did over so many years. Our thoughts are with Doc, his family and others close to him, and we wish him a speedy and complete recovery.”

Bidstrup is hoping Neeson’s illness will end the bitter rift between the duelling versions of The Angels. Neeson reunited with original Angels members Rick and John Brewster in 2008, however after a falling out the Brewster Brothers have formed their own version of The Angels with former Screaming Jets singer Dave Gleeson as frontman.

“Hopefully we can leave that all behind,” Bidstrup said. “Some things are more important than all that. It takes these kind of things to find out who the good guys are.”