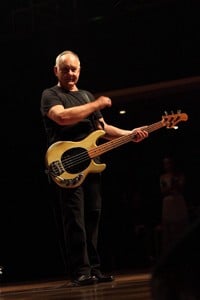 Angels bassist Chris Bailey passed away on Wednesday after a hard fought battle with throat cancer, he was 62. Bailey played on six Angels album, including ‘Face To Face’, ‘No Exit’ and the band’s most recent effort ‘Take It To The Streets’.

Bailey will be farewelled by The Angels’ Rick and John Brewster, and old mates Jimmy Barnes and Ian Moss, at the Thebarton Theatre in Adelaide, Australia on April 17th.

In late February Bailey updated fans on his condition by saying, “In July last year I got a tumour in my lower left jaw bone, which was removed and replaced with the tibia from my left leg. This was all good except every time I passed a footy field I began to dribble. Subsequently, I have developed a rare cancer of the soft palate, for which I’m currently being treated. The treatment involves chemotherapy over the next 5-6 months, and then maybe some radiotherapy. The prognosis is, well, nobody knows for sure right now which way it will go, but I’m fighting hard to stick around for some more partying.”

Chris began his music career in the late ’60s, playing bass in his local school band before going on to co-found the notorious Adelaide based bands Red Angel Panic and Headband, of which he was lead singer. He joined The Angels in 1976, playing on the first five albums and touring constantly until 1982 when he left the band to work for a brief period in the USA. He returned to Australia to become a founding member of GANGgajang in 1984, and in between his Gang commitments became an ‘in demand’ session player for diverse artists playing everything from country music to celtic classics to jazz.