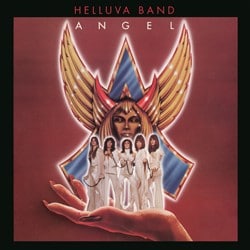 Rock Candy Records have reissued Angel’s first three albums — 1975’s self-titled debut, 1976’s ‘Helluva Band’ and 1977’s ‘On Earth As It Is In Heaven’. These great titles have been released on CD with all the usual Rock Candy trimmings: 24-bit remastering from original source tapes, weighty essay’s about the making of the album, full artist involvement, new interviews, enhanced artwork and additional photos spread out over large full colour booklets. The reissues are available now at www.rockcandyrecords.com.

All three Angel titles will also be available as exact-to-original 180g virgin white vinyl with inserts and Japanese style OBI strips — limited to 500 copies. Full details, prices and ordering will be announced on the Rock Candy website shortly, so keep checking in.

Meticulously assembled as part of an advanced master plan to create the perfect rock band, Angel’s manifest destiny revolved around two key components: that’s killer hooks and killer looks. Seasoned players all, their arrival on the Los Angeles rock scene certainly put the cat amongst the pigeons in a world crying out for something fresh, original and very different.

Based in Los Angeles, and signed to the forward thinking Casablanca label (home to KISS and Parliament), Angel’s debut album was issued in 1975 and received instant approval from anyone hip to the trip. Musically the focus was firmly on a sort of pioneering seventies mash-up of progressive and melodic hard rock, spearheaded by the extraordinary operatic vocals of Frank DiMino and the wildly dexterous keyboard virtuosity of Gregg Giuffria.

Produced by Englishmen Derek Lawrence (Deep Purple, Wishbone Ash) and session guitarist extraordinaire Big Jim Sullivan, the album is treasure trove of surprises and includes several songs that have since gone on to become standard bearers in the star spangled world of melodic-rock mayhem. For categorical proof look no further than the straight-from-the-hip attack of ‘Rock & Rollers’, ‘On And On’ and, arguably the greatest pomp-rock creation of all time, ‘Tower’, a pumping behemoth of a track with keyboards and guitars locked in mortal combat.

‘Helluva Band’ was Angel’s second album, and a record that took their brand of adventurous pomp-rock to astonishing levels. Unafraid of throwing everything and the kitchen sink into their music, they reached a new level of achievement which allowed every member of the band to excel at their craft. Singer Frank DiMino in particular, unleashes one of the definitive vocal performances of the era, an ostentatious operatic style that thrilled audiences back then and still continues to make its mark to this day.

Originally issued in 1976,and produced by British ex pats Derek Lawrence and Big Jim Sullivan in Los Angeles, the albums contains a clutch of 24 Karat showstoppers, including the epic ‘Feelings’, ‘Mirrors’, ‘Pressure Point’ and ‘The Fortune’, a progressive pomp-rock watershed with all the trimmings you might reasonably expect from such a genre defining band.

‘On Earth As It Is In Heaven’ was Angels’ third album and showcases the band expanding their horizons by taking a more melodic hard rock path, but one with hooks and riffs to the fore. Just because the music was harder and edgier, isn’t to say that they had abandoned their progressive roots altogether as Gregg Giuffria’s keyboard work will testify.

Produced by seasoned sound man Eddie Kramer (Hendrix, Zeppelin), the songs here display a raw edge that provides guitarist Punky Meadows with a platform to unleash some of his best riffs, whilst vocalist extraordinaire Frank DiMino soars to new operatic heights. Songs such as ‘Can YouFeel It’, ‘Cast The First Stone’ and ‘White Lightning’ explode with a sense of urgency that suggests the band were scaling new heights of creativity and feeling all the better for it. Oh, and check out the band’s logo — it reads the same upside down, back to front and in a mirror!