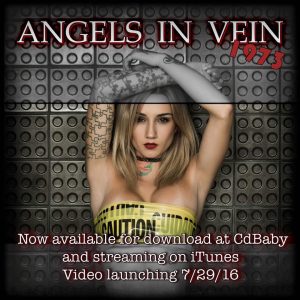 Sleaze Roxx interviewed Blades and VanDahl back in June 2016 and Blades stated the following about Angels In Vein‘s plans once the video for “1973” is released: “I think you know we’re just kind of — everything is happening so fast! We just shot the video for the single “1973.” We’re going to release singles just to sort of get the buzz going as opposed to “Ohhh. We’re just going to take the next six months and you know, when we finish the record, we finish the record, and then we’ll shop it.” You know, it’s such a labour of love and it is a great process but you know, we recently kind of all figured out “You know what? Let’s just release singles and create that buzz and then, you know, when the time is right, we’ll probably package a hard copy CD. That’s the plan right now — just to keep releasing singles over the next six months or so.”