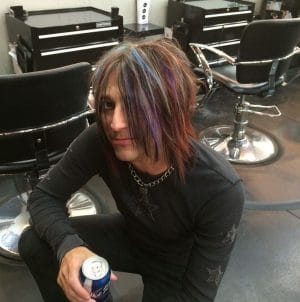 In response to a Sleaze Roxx reader’s comments at the end of a Sleaze Roxx article announcing that bassist Adam Kury had joined Angels In Vein on an interim basis, Taz stated in part (with slight edits):

“… I DO give a shit because I’M in the BAND! And NO the band is not imploding and i can tell you there’s only bigger and more exciting things the band is going to be involed in that i’m very honored to be apart of. As far as Eric is concerened personally, I Love Eric to death and we probably would of been thick as thieves on the road, i truly wish that it’d worked out and i wish him all the best in everything that he pursues. I really had a connection with him and it felt like we were brothers from the 1st meeting we had, which has been a tough thing for me with all the banter i’ve had to read recently. There’s been a few statements that have been released but if you haven’t been in the room to witness what’s actually gone on and what has been said, to make a statement on something like this that you really know nothing about is just not kool.

The band is not overhyped – all the guys in this band look great, are skill players, with great ideas for songs, filled with talent, can deliver and have a history of doing it. The only drama (which seems to be too much for you) in the band has been Eric‘s 1 statement and the reactions from it from 1 party.. there’s really nothing going on here other than 1 individual out of 5 that didn’t have the same vision as the rest of the guys. I’m sorry you would give up on a band that in the worst time in history is trying to bring you something new and hopefully refreshing to the table, which you seemed to have loved – all these guys are true diehard dedicated artists that are here to support music and starve for it in the hardest enviroment ever to do it…

By the way, this band will have a full release by June of 2017 and you will see ME and this BAND on the ROAD!