Angels In Vein release first song “No One Gets Out Alive” 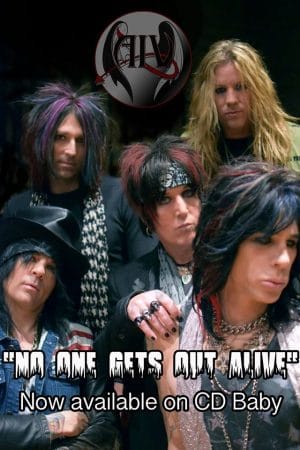 The new sleaze rock “supergroup” Angels In Vein have released their first song which is entitled “No One Gets Out Alive.” The single can be purchased via cdbaby.

Originally, Angels In Vein were going to release the song “1973” as the first single but they apparently changed their mind due to the surprise overwhelming support that they have received since announcing the band’s formation.

Sleaze Roxx recently interviewed Angels In Vein‘s guitarist Stacey Blades and singer Chris Van Dahl. In part 1 of the two-part interview with Sleaze Roxx, VanDahl stated the following about Angels In Vein‘s plans to release their songs: “Our initial plan was to release “1973” with the video but we discussed the possibility of sending something else out of the shoot prior to that just because of the demand. People have been blowing up our pages and our e-mails. They’re like, “Alright, we’ve seen the logos. We know who the band is. We want to hear something.” We get that because we know what it feels like to be impatient and to be excited about something. You want to hear it. It’s like, “OK. I got this but where are the goods?” And for us, that’s the fun part because we’re not concerned. We know that we have the music. So we recently announced that the first song to be released will be “No One Gets Out Alive.” People will not have to wait long to at least get the first song.”