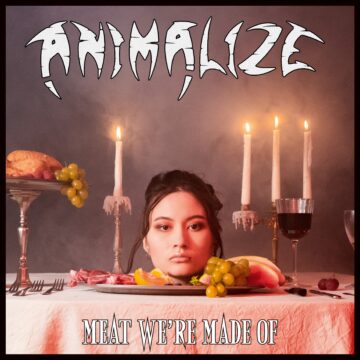 French rockers Animalize will be releasing their debut album Meat We’re Made Of via Dying Victims Productions on June 30, 2022.

Track List for Meat We’re Made Of:
01. Samouraï De l’Univers
02. Back From The Sematary
03. If However You Can Last
04. Eternal Second
05. Pigs From Outer Space
06. Escorte Funèbre
07. Saturday Night Witchcraft
08. The Witch You Are
09. Esprit De L’Asile

“On June 30th internationally, Dying Victims Productions will release the highly anticipated debut album of France’s Animalize, Meat We Are Made Of, on CD and vinyl LP formats. And today,

The roots of France’s Animalize go back to 2014, when the moniker was first chosen, but their lineup didn’t solidify until 2018. From the beginning, the power-trio’s influences were set: heavy metal from the ‘70s and ‘80s, but specifically the likes of Loudness, W.A.S.P., Tokyo Blade, Glenn Tipton, Ritchie Blackmore, Glenn Hughes, and Annihilator and especially classic French heavy metal like ADX, Malediction, Sortilège, and Warning. Synthwave and New Wave, both old and new, also musically influence Animalize. 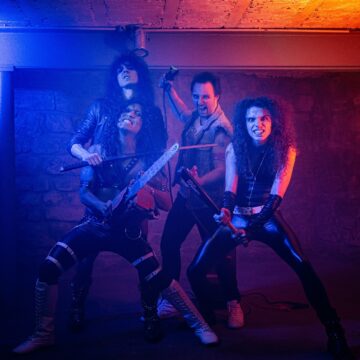 However, it is the band’s love of movies which arguably influences Animalize’s outlook the most. For them, a visual identity and atmosphere – whether in their visual aesthetic, be it artwork or onstage, or especially their upcoming videos – is of the utmost importance. Film also feeds their lyrics, quite often. The band state that such movies as Evil Dead, Mad Max, Pet Sematary, Masters of the Universe, and The Terminator are among their most beloved.

Armed with these noble touchstones, Animalize released their debut EP, Tapes from the Crypt, in 2020. A swift and solid 20 minutes, the EP displayed massive promise from Animalize, which they’ve handily surpassed with their full-length debut, Meat We Are Made Of. Graced again with an unforgettable cover, Meat We Are Made Of is a breathless and breathtaking statement. Its sound races all over the place, from cruising speed to tricky detours to headbanging mid-tempos, with an organized sort of mayhem, as explosive solos and dramatic vocal layering turn these nine beguiling songs into impossible anthems. That sound is undeniably HEAVY METAL, but Animalize manage to synthesize speed metal with power-thrash and traditional metal into a dizzying-yet-addicting blend that jumps across countries and even continents with insane ease. It’s both futuristic and firmly rooted in the past, and the album’s sterling production sharpens it to a katana.

Maybe most amazingly, this dazzling interplay comes from a power-trio, but Animalize will become a quartet for upcoming live shows. Likewise, Meat We Are Made Of had, in fact, been finished for some time, but the band have prepared two music videos for its release which tell a story – eight actors in addition to the band, with tons of action and FX. Altogether, a suitably grand entrance for what will be one of metal’s most literally explosive debuts this year!

In the meantime, explode with the brand-new video “”Samouraï de l’Univers” exclusively HERE, courtesy of Deaf Forever, Germany’s defenders of the true.”