Anthrax drummer Charlie Benante was recently interviewed by Jimmy Kay and Alan Dixon for Canada’s The Metal Voice. Benante was promoting his upcoming covers album Silver Lining that will be released via Megaforce Records on May 14, 2021. 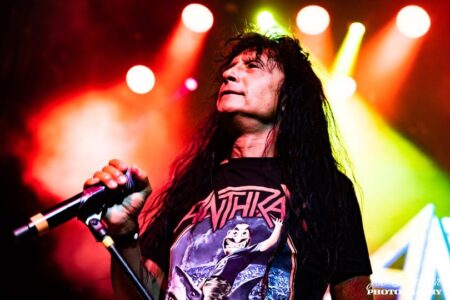 Anthrax‘s last studio album For All Kings dates back more than five years. Benante was asked where Anthrax are at with respect to a new studio album to which he replied (with slight edits):

“We are going to start working on it again. Before Covid hit, we had about 7-8 songs that were killer and we are going to continue to work on those and more. We didn’t want to put a record out at this time cause we thought it would get stuck in that Covid vacuum. So we wanted to wait and so at least we could go out and play these songs.”

In terms of the title Silver Lining for his upcoming covers album, Benante indicated: “I tried to see out of the darkness [pandemic], the depression that there was a Silver Lining. We are all going through this and some of us are have it a lot harder than a lot of other people are and they are silver linings. I would see people complaining about their kids and shit like that. Man enjoy it, you are getting to have all this time off to spend with your kids that you would never have. Enjoy it, just embrace it”

In regard to the album itself, Benante commented: “I wasn’t even going to put them out and I kept getting asked to do it more and more then I said alright I will do it. It was just hard to choose which ones to put on there. If I put the Rush songs on it, it would take up a lot of space. I had the idea of putting a Rush EP out for Record Store Day next November that is going to be fun that is going to be all the Rush songs by themselves [done in quarantine]. A lot of these songs on the record have always been in the back of my mind, songs that I loved. I just had to find the right people to make them happen and once I did it just snowballed.”

You can read other excerpts from the interview with Charlie Benante at The Metal Voice‘s website and/or listen to the interview below: