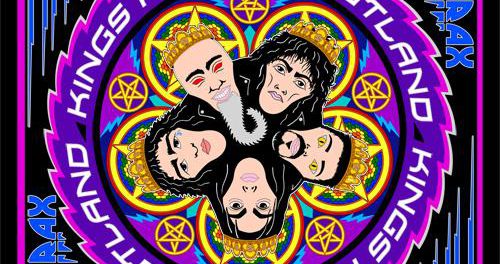 Thrash metal giants Anthrax will be releasing a live DVD entitled Kings Among Scotland via Megaforce Records on April 27, 2018. 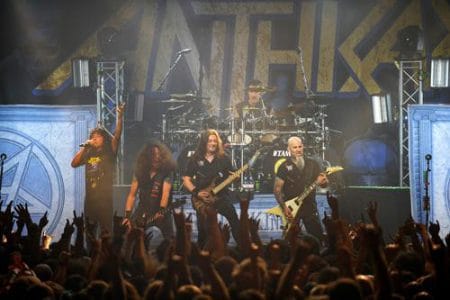 “Multi-Grammy-nominated thrash icons Anthrax will see “Kings Among Scotland,” the band’s long-awaited live-in-concert DVD, arrive in stores and online on April 27, 2018 (Megaforce). Captured last February 15th at the band’s sold-out concert at Glasgow’s historic venue Barrowland Ballroom, the two-hour “Kings Among Scotland” incorporates the band’s entire live show along with interviews, behind-the-scenes footage and other B-roll shot on the band’s tour bus, backstage, in hotels and elsewhere. The DVD will also include a “gear rundown” from each of the band members. “Kings Among Scotland” can be pre-ordered starting today; log on to www.anthrax.com for all purchasing information.

“Playing for our friends at the Barrowlands has always been very special,” said Anthrax‘s Frank Bello. “We all know we’re going to get together and have an insanely great time, and we think that incredible interaction and energy really comes through on this video.”

With packaging art created by Steve Thompson (Slayer, Motörhead, Iron Maiden), the DVD’s concert is presented in two parts. For part one, Anthrax perfomed the “favorites” that had been voted on pre-show by the band’s fans and includes gems like “Madhouse,” “Be All, End All,” “Breathing Lightning,” and “A.I.R.” The band augmented the stage production for part two, with ramps and staircases and other production values while they tore into their classic 1987 album Among The Living, performing “Caught In A Mosh,” “I Am the Law,” “Indians,” “Eflinikufesin (N.F.L.),” and more.

“It was pretty a intense show,” added guitarist Scott Ian, “especially when the crowd was so insane, the floor actually started moving up and down.”

“It was a challenge for all of us to play ‘Among The Living‘ live,” admits Charlie Benante. “We’ve played a number of that album’s songs in our shows over the years, but not all of them, and playing a song in a recording studio is not the same as playing it live on stage. So we put in a lot of time to get all of the tracks down perfectly. And I’ll tell you, after we finished that set, as arduous as it was, we all felt a sense of exhiliration, like we could go out and do it again.”

“Kings Among Scotland” was produced, directed, filmed and edited for Film24Productions by Paul M. Green (Opeth, The Damned, The Levellers), with the sound mixed by Anthrax studio producer Jay Ruston. For the filming, Green utilized 17 cameras, including a crane and several mobile and stationery Go-Pros.

The release of “Kings Among Scotland” will be preceded by Anthrax‘s North American co-headline tour with Killswitch Engage – “KillThrax 2018” – set to kick off January 25 in Montreal. All dates are below. 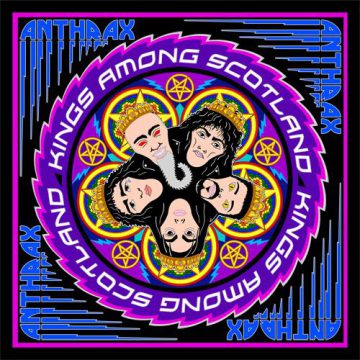 About Anthrax:
As part of the band’s 35th anniversary year, Anthrax released one of 2016’s most-anticipated metal/thrash albums, For All Kings (February 26/Megaforce in North America/Nuclear Blast internationally), that debuted at #1 on Billboard‘s Hard Rock Chart, and #9 on the Top 200, becoming Anthrax‘s highest-charting album in more than two decades. Written by drummer Charlie Benante, bassist Frank Bello and guitarist Scott Ian, the dynamic triumvirate whose unique composition chemistry is, in part, what sets Anthrax‘s music apart from other bands’ in the same genre, combined with Joey Belladonna‘s breathtaking vocals and the searing guitar leads by newest member Jonathan Donais, it’s no wonder the album and the band’s live shows have consistently received tremendous reviews.

Over its 35-year career, Anthrax has been a pioneering band with its unique style, sound and heavy brand of thrash metal, and, as Metallica‘s Kirk Hammett put it, “one can hear their influence on any number of up and coming bands.” Anthrax has sold in excess of 10-million units, received multiple Gold and Platinum certifications, six Grammy nominations and a host of other accolades from the media, industry and fans. From the race and genre barriers Anthrax helped break down in 1988 when they collaborated with Public Enemy on “Bring The Noise,” to becoming a card-carrying member of The Big Four – with Metallica, Slayer and Megadeth – as one of the four bands that defined the speed/thrash metal genre, to being the first metal band to have its music heard on Mars when NASA played “Got The Time” to wake up the Mars Rover, Anthrax continues to break ground and innovate. On December 13, 2016, the Epiphone/Revolver Music Awards presented Anthrax with its first-ever “Innovator Award” to acknowledge the band’s contribution to music.”