Canadian heavy metal band Anvil have released a lyric video for their new song “Die For A Lie” from their upcoming new album Anvil Is Anvil, which will be released via Steamhammer on February 26, 2016. 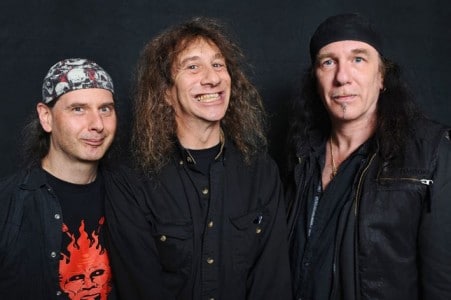 Anvil Is Anvil is the group’s 16th studio album and the follow up to Anvil‘s last album Hope In Hell, which was released back in 2013.

Sleaze Roxx stated the following in its review of Hope In Hell: “The songs on Hope In Hell appear to be typical Anvil fare — fast and furious for the most part, with some awesome drumming by icon Robb Reiner and punctuated by Lips‘ unique vocal delivery. What has surprised me the most on Hope In Hell is what a good guitarist that Lips really is — the guitar solos sound really good and for the most part complement the other parts of the songs quite nicely.”

Anvil are scheduled to embark on a massive tour of Europe in support of former Accept frontman Udo Dirkschneider‘s new band titled Dirkschneider. The tour starts on February 20, 2016 and ends on April 24, 2016 during which Anvil will be playing  over 30 shows in ten different European countries. Anvil will also be embarking on a tour of the USA from May 12, 2016 to June 18, 2016 where they are scheduled to play 19 shows.