Anvil release video for track “Bitch In The Box”

Canadian veteran heavy metal rockers Anvil have released a video for their song “Bitch In The Box” from their latest studio album Pounding The Pavement, which was released in January 2018. 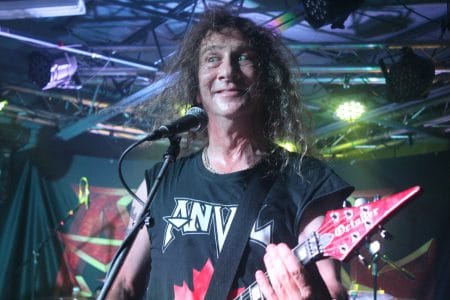 Sleaze Roxx caught Anvil performing live at The Rockpile in Toronto, Ontario, Canada back in August 2018 and stated the following in its concert review:

“Anvil did mix up their set considerably from the last time that I saw them almost five years ago keeping their concert staples while inserting a bunch of new songs from their latest studio album Pounding The Pavement, playing at least one deeper cut (“Oooh Baby” from their 1981 debut Hard ‘n’ Heavy) and even a cover (the over played Steppenwolf classic “Born To Be Wild”). Overall, Anvil played a remarkable amount of newer songs from their latest studio albums instead of relying on tracks from their likely most well known early albums (Hard ‘n Heavy, Metal On Metal and Forged In Fire). Anvil ended up playing one song from Hard ‘n’ Heavy (1981), four from Metal On Metal (1982), two from Forged In Fire (1983), one from This Is Thirteen (2007), three from Juggernaut Of Justice (2011), one from Hope In Hell (2013), three from Pounding The Pavement (2018) and one cover song.”

Anvil‘s “Bitch In The Box” video:

Taken from the current album “Pounding The Pavement” – out now!You can order it here: https://Anvil.lnk.to/PoundingThePavementhttps://www.facebook.com/anvilm…