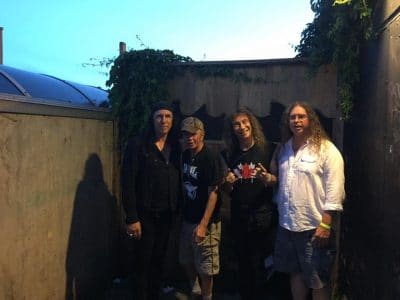 Anvil co-founders and mainstays Lips (vocals, guitar) and Robb Reiner (drums), recently reunited with former original Anvil band members Ian Dickson (bass) and Dave “Squirrely” Allison (guitar) at a concert at the Music Hall Night Club & Concert Venue in Oshawa, Ontario, Canada on July 23, 2016. The two former Anvil members joined Lips and Reiner on stage for the song “Metal On Metal” which was the first time that they were reportedly together on stage since 1989.

Tracy Pearson – Had an absolute blast! Thanks guys ? | Facebook

Had an absolute blast! Thanks guys ?