Canadian veteran heavy metal rockers Anvil have started a new Pledge Campaign to raise funds for the recording of their 17th studio album which will be called Pounding The Pavement. 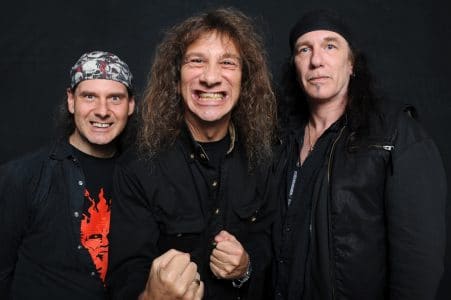 The following message was posted on Anvil‘s Pledge Campaign site:

We’re very excited to announce that we are about to begin the recording of our new CD entitled Pounding The Pavement.

We had a very successful PledgeMusic campaign for the last recording and are once again happy to announce we are opening a new campaign. We will offer some of the same items as well as some new and exciting options and opportunities.

The recording will begin in Germany on August 1st, 2017 and will be done by September. The release is set for early 2018. We hope you get involved and take part in what is our 17th studio recording and 40 years of Pounding The Pavement!”

Anvil have experienced a rebirth with the success of their documentary Anvil! The Story Of Anvil, which first premiered in January 2008. Sleaze Roxx stated the following in its review of the documentary:

Anvil! The Story Of Anvil should be a must have item for any heavy metal fan. It’s a story of hope, love, passion and a never say die attitude by two individuals who kept pursuing their heavy metal dream and who in many ways were finally rewarded more than 30 years after first starting their adventure.”