The Apocalyptic Lovers consisting of drummer Dave Hope, lead vocalist Rob Kane, guitarist Sean Magee  and bassist Mike Nagy have released a live video for their song “Change of Frequency” that was filmed when they opened for Dokken at the Whisky A Go-Go in West Hollywood, California, USA back on April 20, 2019.

The band’s press release on August 11, 2020 posted on its website indicates (with slight edits): 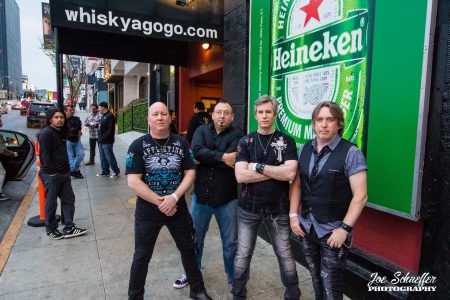 “Like many bands across the globe, the Apocalyptic Lovers have put the brakes on releasing their new album in 2020. The glass half full, the band has more new tunes to fight over when the dust settles plus videos on the way for musical relief in more ways than one.

Over the next month (beginning today), the band will release three new music videos for fans to enjoy and share. The first two videos are live versions of songs from their Michael Wagener mixed album Redemption Volume I. First out of the gate today will be “Change of Frequency” followed by “Who the Hell Are You” on September 1st.

The third release is going to be a brand new video for the opening track on Redemption Volume I, Better Days. With all that is going on in the world today, founding member and drummer Dave Hope started receiving a lot of messages regarding “Better Days” – a song penned by the bands lead guitarist Sean Magee.

Hope stated – “We have something very special planned for “Better Days” and more information will be available as we nail down a release date for it and finalize some details. The video will hands down be our best to date and we hope to also do some good with it as well. Like I said – a lot more to come on that one!

The real story for now, would be the first two live videos we pulled from our Whisky A Go Go gig in Hollywood opening for Dokken. Since almost all the concerts have either been canceled or rescheduled and most new albums put on hold, we thought it would be cool to re-share a very fun and magical night via these two videos.

We originally put the entire concert video out on YouTube, but if most people have an attention span like I do, one might get through one or two songs at best. We picked our favorite two performances from that evening and will showcase each individually. When you watch the videos, you can just see and hear the magic of an all original live rock show. We had never played the Whisky before and no one really knew who the hell we were, but you can just see how the crowd gets pulled in with each song. Its cool because it really is the music that wins them over. We are much older now and and not as pretty as we used to be (laughs out loud), so I know its not us! I always like to say, we may not have the hair, but we sure as hell still bring the metal.”

The live version of “Change of Frequency” from the world famous Whisky A Go Go will launch a little later today (August, 11) followed by “Who The Hell Are You” (September, 1st) and “Better Days” sometime in mid September. Further information will be made available once a release date is set for the “Better Days” video.

About the Apocalyptic Lovers: Reminiscent of when arena rock and music videos ruled the air waves, the Apocalyptic Lovers consists of all four original members: founding member Dave Hope, vocalist Rob Kane, lead guitarist Sean Magee, and bassist Mike Nagy. Once based out of the rust belt city of Youngstown, Ohio, the four members now populate great cities in AZ, PA, RI and VA, but this has not deterred them from writing, recording and planning world domination one fan at a time.”