“Arena rock” hard rockers Apocalyptic Lovers have one day left to generate 100 vinyl album orders of their debut album Redemption Volume One so that it gets released on vinyl. The group has added an extra incentive for anyone who purchases its debut album in vinyl format by offering an exclusive different album cover. 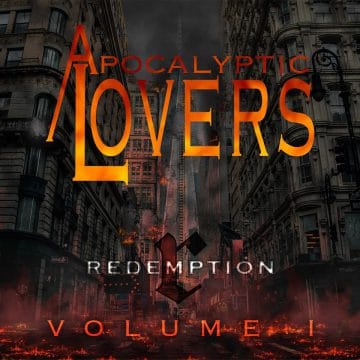 Not only will everyone that orders get a numbered album, signed photo, custom guitar pick and THANKED in the album liner notes, there will now be ALL NEW ALBUM ART regarding the front and back cover. Pictured is the new cover. Click to enlarge & check out the detail.

Our vinyl campaign is going to make goal, so its down to who is gonna be one of the lucky people to own one? Five more albums went today and now only 2 days left in the campaign!

Collectors – this is a one and done run, so this art will only be on vinyl and will not be used on anything else regarding this album.

Sleaze Roxx stated the following in its review of Redemption Volume One: “Apocalyptic Lovers proclaim themselves as playing “arena rock” and I got to agree with them in that regard. They do what they do quite well. What I’d like to see is Kane take a grittier approach to his vocals which I think in turn would give a better contrast with the vocal harmonies provided by the rest of the band. I also think that guitarist Sean Magee‘s shackles should be  undone because the guy can really play but seems to be held back during most of the songs. Mageehas the potential to be what George Lynch was to Dokken but on Redemption Volume I, we only seemingly get a little sampling of what the man can do. Overall, Apocalyptic Lovers deliver a solid debut album filled with melodies and ’80s sounding songs. With a little more grit to Kane‘s vocals and an unleashed Magee, they have the potential to make Redemption Volume II a true classic.”