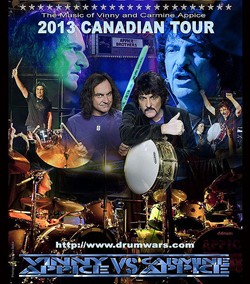 Appice Drum Wars Kicks Off Canadian Tour On May 9th

Legendary drummer brothers Carmine and Vinny Appice will kick off their first Canadian tour on May 9th, 2013 at This Ain’t Hollywood in Hamilton, Ontario. ‘Drum Wars’ was created with Vinny Appice and legendary older brother Carmine Appice and is a rock drumming show featuring music from the history of bands the Appice brothers have played with, as well as drum solos, comedy and a massive drum battle finale that tears it up.

The brothers will also offer VIP ticket packages to fans for this tour. The packages offers concert attendees an opportunity to hang out with two of rock’s legendary icons — Carmine and Vinny Appice. VIP packages also include admission to the show and soundcheck prior to the show, photo opportunities at soundcheck, free ‘Drum Wars’ t-shirt, autographed ‘Drum Wars’ photos, photos of VIP ticket holders behind Carmine and Vinny’s drum sets, and VIP commemorative passes. The VIP ticket packages are limited to 10 per show and can be purchased for $125US through paypal at www.serge.org/drumwarsviptix.htm.

“There is nothing like Drum Wars in rock music. When me and Vinny play together or battle, it’s like thunder!!” says Carmine Appice.

As drummer for Vanilla Fudge, Carmine Appice set the grooves for the groundbreaking band’s 1967 psychedelic debut, inadvertently inventing Stoner Rock in the process. The Fudge had no precedent — the band was totally unique. No rock group, up until that point, had ever so lugubriously s-t-r-e-t-c-h-e-d out well-known pop tunes like the Beatles “Eleanor Rigby” and “Ticket To Ride”, Curtis Mayfield’s “People Get Ready”, Sonny & Cher’s “Bang Bang”, Rod Argent’s “She’s Not There” and, most famously, The Supremes’ Motown classic “You Keep Me Hangin’ On” to such hippie heights. With Mark Stein’s mysterioso wash of Grand Guignol keyboard theatrics, Tim Bogert’s amazing and trippy bass runs, and guitarist Vince Martell’s era-happy soloing, Appice boomed like no other drummer in rock history. Their debut album still stands today as a hard rock classic. Vanilla Fudge went on to tour with Jimi Hendrix, Cream, and even had Led Zeppelin as an opening act. Post Vanilla Fudge, Bogert and Appice formed Cactus (seen as an influence on King’s X and Van Halen). Post-Cactus, the rhythm section found Grammy-winning guitar hero Jeff Beck to form the first supergroup, Beck, Bogert & Appice.

One of the premier showmen in rock, Appice became known worldwide for his astonishing live performances, in addition to becoming a highly sought-after session drummer, recording with countless artists throughout his career. In ’76, he joined Rod Stewart’s band, touring, recording and writing two of Stewart’s biggest hits, “Do Ya Think I’m Sexy” and “Young Turks”. He left Stewart to record his first solo album, ‘Rockers’, and tour Japan and North America with an all-star band. In the early ’80s he toured with Ozzy Osbourne and Ted Nugent and in the mid ’80s formed King Kobra for two Capitol albums and international touring. And in the late ’80s, Carmine played on a Pink Floyd record ‘Momentary Lapse of Reason’ and formed Blue Murder with Whitesnake’s John Sykes and The Firm’s Tony Franklin. In the early ’90s, he pounded away soul-style for The Edgar Winter Group.

As an educator, Carmine was the first to legitimize rock drumming with his landmark book, ‘The Realistic Rock Drum Method’, selling over 400,000 copies (now in video format). He was the first rock drummer and rock musician to conduct instructional clinics and symposiums around the world, a tradition he continues. In appreciation for his universal appeal, Los Angeles was one of four cities that have had ‘Carmine Appice Day’. In ’91, he was forever immortalized via his induction in cement to the Hollywood’s Rock Walk (next to his idols, Gene Krupa and Buddy Rich).

Vinny Appice has powered the rhythm live and in the studio with the bands Dio, Black Sabbath, Heaven And Hell, Ozzy Osbourne, WWIII, Axis and Rick Derringer, and at age 16 performed with John Lennon ‘live’ on stage and in the studio. Vinny has recorded and co-written songs on over 25 albums and CDs, many which are multi-platinum records and still selling numerous copies and downloads today! Drumming across the world for over two decades and playing before countless fans and selling millions of records, his drumming can also be heard on numerous movie soundtracks and DVDs including ‘Wayne’s World 2’, ‘Heavy Metal’, ‘Iron Eagle’, ‘Bedazzled’ and recently ‘Bad Teacher’. He is the author of drum instruction book ‘Rock Steady’ and DVD ‘Hard Rock Drumming Techniques’ and has performed incredible drum clinics around the globe. Numerous books have been written about Black Sabbath and Dio with the authors always mentioning his unique powerful drumming style which has become a part of rock drumming history.

In 2006, Black Sabbath was reborn as Heaven And Hell with Vinny again driving the rhythm behind the band with the great Ronnie James Dio on vocals. Three world tours followed as well as a CD titled ‘The Devil You Know’, the first studio album since 1991’s ‘Dehumanizer’. The band also released ‘Heaven And Hell Live In Europe’ DVD in 2010 which was the last video recording of the late Ronnie James Dio at the Wacken Festival in Germany. Vinny can also be heard on the recent release of ‘Dio At Donington’, a live performance of Dio in 1983 and 1987. In 2012, Vinny’s new heavy band Kill Devil Hill, featuring mega bassist Rex Brown (Pantera/Down), vocalist Dewey Bragg and guitarist Mark Zavon, toured and released their first CD on SPV Records. The music is a cross between Black Sabbath, Alice In Chains and some Led Zeppelin. Vinny is working on the release of a new rock drum instruction book and instructional video.