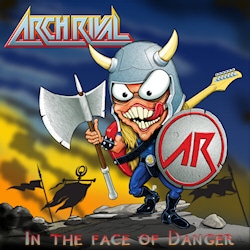 Rock-a-holics Records (www.rockaholicsrecords.com) is proud to announce that we have worked out a deal with Dayton, Ohio / Texas greats ARCH RIVAL and that theirs will be one of our first releases in late May, among other great and exciting artists.

We’re immensely proud to have in our ranks such an excellent band, led by the charismatic guitar virtuoso, Michael Harris, who doesn’t need much of an introduction. This guy is one of the best players in the business and he keeps on releasing quality material time after time, no matter which band he plays with. Apart from his three releases with ARCH RIVAL and half a dozen solo albums, Michael was trusted by the great Vitalij Kuprij (ARTENSION) to be the leadguitarist on his solo albums and he also masterminded the incredible Thought Chamber, which featured the vocal talents of one Ted Leonard (of Enchant fame) whose debut “Angular Perception” was one of the top sellers, if not the Top Seller for Inside Out Music, when it was released back in 2007. His phenomenal but always tasteful playing was influenced by such guitar luminaries as Ritchie Blackmore, Robin Trower, & Jimmy Page at first and eventually Frank Marino,Steve Morse, Uli Jon Roth, and Michael Schenker.

But ARCH RIVAL is not, a one man show as we’ve got the dynamic duo of Gary Rigmaiden on bass and Greg Martin on drums. Two fine players indeed, whoprovide the perfect rhythmical background for the music of ARCH RIVAL. Speaking of which … well the songs, they really SHINE ! Perfectly crafted,uber-cool, rock tunes with lots of attitude and choruses that will stick to your head like super glue. Oh and not to forget, there’s THE VOICE – Steve Snyder – the singer and soul of ARCH RIVAL. Man, if the songs and the playing are going to leave you gasping for air, Steve is guaranteed to deliver you, the final blow. He’s one of the best vocalists, you’ve probably never heard before, (your loss) but you won’t be able to get him out of your mind – once you have!This guy has a great range; a beautiful voice that overflows with emotion, a passionate and gutsy delivery…this guy has unbelievable charisma!!! It’s beyond us, how this guy or the band for that matter never really, made it big. If you like Don Dokken, Jon Oliva and Paul Rogers, well the Snyderman sounds like all of them rolled into one and then some.

And it’s not only us. Keith Langerman, a respected music critic, states, “ARCH RIVAL is simply one of the best metal bands ever produced in the U.S.A. past or present!” We couldn’t agree more! ARCH RIVAL has got the undeniable ability to write compelling rock music with lots of melody as well as power!

Their 1991 debut “IN THE FACE OF DANGER”, recorded at Midtown Studio in Nashville, immediately garnered airplay and major label attention to the group and they signed their first overseas deals. The band toured in support of “I.T.F.O.D.”, while working up new material for their follow up, “WAKE UP YOUR MIND”. Travelling to the New York area for these recording sessions, the band discovered new sounds and styles on their critically acclaimed 2nd album. This highly impressive recording again landed them solid deals in Europe and Japan. A subsequent tour followed, and after Michael and Steve each recorded solo albums, 1997 found ARCH RIVAL returning once again with more great music in “THIRD DEGREE BURNS” which landed the band even better deals in Japan and Europe.

The band went onto hiatus for a while, never really breaking up, as per se, with each member pursuing some outside musical projects at the time, while they all maintained some loose contact, but what started as a “short-break” ended up being an eleven year absence from the “scene”.

Alas 2008 brought the first gigs of the band in many a year and also the demoing of some new material. 2009 promises to be a really interesting year with luxurious re-releases of the back catalogue coming out, which should lead to a new albumsometime in 2010 and possible touring/festival activity around the same time.

Rock-a-holics Records is very proud to be re-releasing ARCH RIVAL’s amazing debut – “IN THE FACE OF DANGER”.

The album has been carefully re-mastered and expanded with the inclusion of some live tracks. There is also an hour long DVD with 4 promotional video clips (2 blue screen, 2 performance/live) and pretty much the entire album performed live, as well as an informative booklet, encased in a 3panel, double digi pack with all the lyrics and rare pictures of the band from the era. To top it all, there’s some brand new cover artwork, depicting the band’s mascot, ARCHIE : The Rock Warrior in full rock regalia,(which should also look sweet on vinyl) which has been specially printed using a method which makes the metallic parts of his armor, shine. (You might have seen this effect utilized on some special edition DVDs).

A worldwide release by ROCK-A-HOLICS RECORDS is expected in late May, with JAPANESE and TAIWANESE licenses to be confirmed soon.