Santa Cruz frontman Archie Cruz was recently interviewed by Nicholas Jason Lopez for The Music Bugle. Cruz spoke quite a bit about Santa Cruz‘s upcoming new studio album Katharsis, which will be released on October 18, 2019. 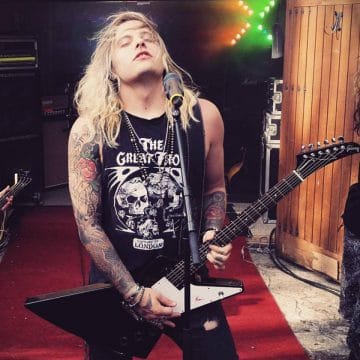 In terms of the choice of the first two singles “Changing of Seasons” and “Tell Me Why”, Cruz advised: “We wanted to open the game with “Changing Of Seasons,” as it’s very dramatic and comments on the events that went down a year and a half ago. With “Tell Me Why,” it’s more traditional and the lyrics are basic boy & girl stuff, so it was a good neutral choice for the second single.”

With respect to the new album and how it compares to earlier work, Cruz opined: “It was an intense process, since it took only like half a year from scratch to having that finished product in our hands. It’s very different from earlier Santa Cruz and it’s gonna surprise a lot of people I’m sure.”

Santa Cruz recently played to about 50,000 people in Tallinn, Estonia while supporting Bon Jovi. Cruz was asked how it feels to play in front of that many people to which he replied: “It’s something I wouldn’t mind doing more often haha. It’s very surreal, you got like, an ocean of people in front of you and you’re just out there, doing your thing. I can only imagine the feeling when they know all your songs and lyrics and are singing along.”

You can read the rest of the interview with Archie Cruz at The Music Bugle‘s website.

Santa Cruz‘s “Tell Me Why” song (from upcoming album Katharsis):

Santa Cruz – “Tell Me Why” (official)

The second preview track from the Helsinki Hellraisers’ new album, “Katharsis,” coming this fall! Follow the band on socials for details about the upcoming p…

First video / single from the debut album “Screaming for Adrenaline”, out on April 26th.Directed by T. Jaakolahttp://www.santacruz.fi/Order from Record Shop …