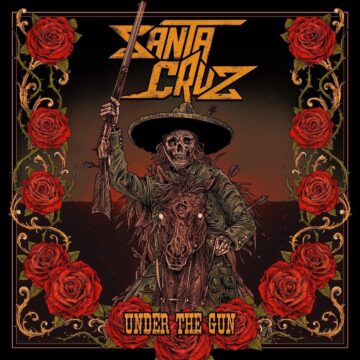 Santa Cruz frontman Archie Cruz was recently interviewed by Mark for the Rock Down South podcast.

Last month, Santa Cruz released the single “Under The Gun.” Cruz stated the following about Santa Cruz‘s upcoming studio album (as provided by the Rock Down South podcast with slight edits): “The record is done. We did it last fall in Helsinski… The vibe is the same as with ‘Under The gun.’ But in every song, you can hear what artist or band influenced that particular song… It’s kind of a homage to my musical heroes… Each song is a tribute. It’s not a “Oh, he ripped them off” or something.”

When asked about his worst show, Cruz indicated:”I jumped on to the monitor and was supposed to do a David Lee Roth split. And BOOM! The monitor went off under my legs and I fell on the thing live on TV. Crash landed on it. My back got super hurt… I remember that thought ‘Oh my God, I am on live TV. I’m about to look so stupid falling over.’ The next day, we had a show in Manchester and I remember having the worst back pains ever. I probably should have got a doctor to check on my back, but I was young and was just like ‘I’ll numb the pain with booze’… And I ended up hammering five bottles of wine before each set just to be able to go on stage with that back pain.”

You can listen to the interview with Archie Cruz on the Rock Down South podcast below:

Santa Cruz‘s “Under The Gun” single: