Are Guns N’ Roses working on a new album with Slash in a studio? 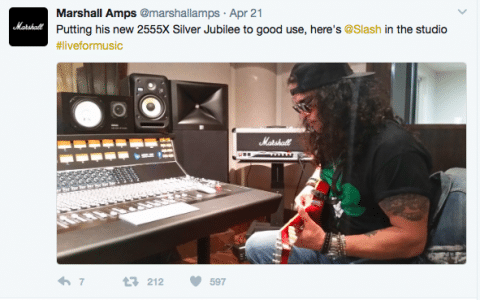 Marshall Amps has posted a photo of Guns N’ Roses guitarist Slash in the studio fueling speculation that a new Guns N’ Roses studio album may be in the works.

Australian website Tone Deaf, who previously circulated an article that former The Dead Daisies singer Jon Stevens would be replacing Axl Rose in AC/DC on April 1, 2017, has reported in part as follows:

While Slash could be mucking around on a new solo effort, his usual vocalist Myles Kennedy is out touring with his band Alter Bridge, Ultimate Guitar reports, while Gunners are just lounging around and recovering from their monster tour.

For his part, Axl has explicitly stated that his bandmates are open to the idea of working with him on a new record. “We are working on new stuff,” the NME quoted him as saying last year. “I’ve got a lot of stuff. I played some of it to Slash and Duff, and they liked it. They might play on it.”

He even had some words of praise for the guitarist and his work ethic, adding, “To Slash’s credit, he and Duff worked very hard… I didn’t have to tell Slash how to play ‘Chinese Democracy’ songs. He just embraced them and worked really hard.”

You can read the rest of the article at Tone Deaf.