Heavy Pettin’ guitarist Punky Mendoza has apparently posted the band’s logo with 2017 beside it on his Facebook page. 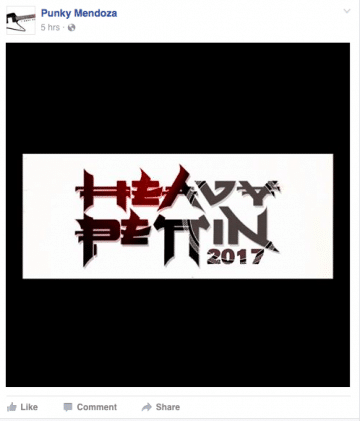 In early 2016, Team Rock published an article entitled Flash Metal Suicide: Heavy Pettin’, which detailed the rise and fall of Heavy Pettin’. Excerpts from the Team Rock article are below:

“Within just months of forming, Heavy Pettin’ found themselves in the cross-hairs of a good ol’ fashioned major label bidding war. While the band always contended that the only similarities between themselves and Def Lep were the fact that they were “Young and British”, it should be noted that Def Lep‘s then-manager Peter Mensch was the man behind their showcase gigs and I don’t think there an article was ever written, including this one, that didn’t compare their Sweet-inspired pop-metal to [Joe] Elliot and the boys. That can’t be coincidence, man.

Anyway, they signed to Polydor and Brian May to produce their first album, 1983’s Lettin’ Loose. Incidentally, it was self-titled in the US. Not sure why, but that’s what happened. It’s a fun record, anchored by the minor hit In And Out Of Love, but it’s alarmingly lightweight, even for a Lep rip-off. For an audience that was eating up the psuedo-Satanic barbed-wire pop metal of Crue‘s Shout at the Devil, Pettin‘s breezy melodic rock didn’t quite deliver the goods. But they had a great logo and the glam metal party was getting bigger and bigger every day, so what the hell, Heavy Pettin’, why not? 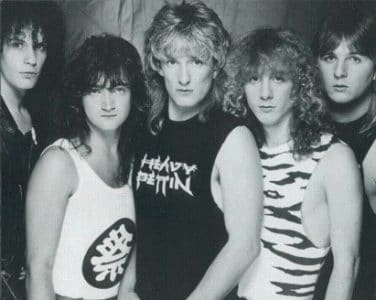 The band landed some opening spots and tour dates with bands like Kiss, Ozzy, Whitesnake, really all the prime movers of 80’s hard rock. They were splashed all over the glossy metal press. They were gonna be big in America, man. Real big. And sure, the first album didn’t really land with the authoritative heft it was supposed to, but the next one, the next one would really set the world ablaze.

In 1985, Heavy Pettin’ released their second full-length album, Rock Ain’t Dead. And they were right, it wasn’t. In fact, the world was balls-deep in hard rock and heavy metal with no end in sight, so this record should’ve been Pettin‘s killing blow, the one that established the Lep heir apparent as global arena rockers. But it wasn’t actually a rock record. At least not in the way the first one was. I mean, the first one wasn’t even overwhelmingly rock, but on RAD (ha!), Pettin’ were so desperate for radio airplay that they smoothed over every last remaining edge and ended up so far into AOR territory that they sounded positively Canadian…”