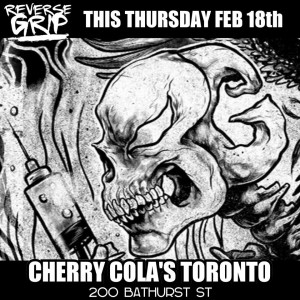 Canadian sleaze rockers, Reverse Grip, are playing a “one night only” gig on February 18, 2016 at Cherry Cola’s in Toronto, Ontario, Canada with Chemical Burn and Wide Open Throttle.

Reverse Grip have advertised their show as follows on a Facebook events page: “Come down to the sexiest live music venue in Toronto CHERRY COLAS for a ONE NIGHT ONLY event of epic proportions! Toronto metal bad boys Reverse Grip will return to the stage for the first time in over 2 years and they will be bringing some special guests with them!”

Reverse Grip‘s guitarist Sean Broda posted the following comments on his Facebook page on February 14 and 15, 2016: “Last Grip show!! Thursday night, cherry colas!!! Be there!” and “…for now we have no plans after the show.”

With Reverse Grip‘s drummer and leader, Dylan Broda, back from Finland in Toronto, Canada for a visit, the group have arranged to play a special show at Cherry Cola’s in Toronto. Reverse Grip‘s frontman Dru Broda spoke to Sleaze Roxx back in December 2015 about the band’s difficulties in forging ahead without drummer Dylan Broda in the line-up. Dru Broda stated: “Well we’ve had a lot of time off, some different ideas as to where we wanted to be at this point and what we wanted to do. Dylan went to Finland and is also playing in a cool band called Snow White’s Poison Bite, so that also made it hard to get things restarted. With him gone, replacing a key member of a band that in our opinion gives us our sound, was extremely difficult. More so than we originally thought. It just didn’t feel the same without him back there. To us, he’s more than Reverse Grip‘s drummer. He was our leader and our older brother. So we all decided it best to just take a break and do some different things.”

Reverse Grip is bringing you a short video, portraying a young woman’s troubling struggle with her life. As we all watch her slowly fade into the dark gutter…