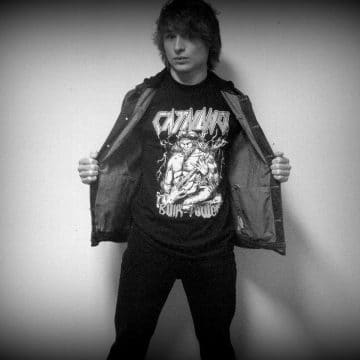 Speaking exclusively with Sleaze Roxx, Tamberelli has advised that the single “Evil Minds” features himself on guitar, Mike Davis on bass, Raphael Gazal on vocals, a guest guitar solo by Chip Roberts and programmed drums. The single was produced by Chris Tondreau at Green Room Recording in Hamilton, Ontario, Canada.

Gazal handled the lead vocals on four of the six songs on the Armageddon Roxx EP.

Sleaze Roxx stated the following in its review of Armageddon Roxx‘s debut self-titled EP: “Technology these days is pretty darn incredible. Take for example the case of Armageddon Roxx. Guitarist Sam Tamberelli wanted to create an album but could not find the appropriate musicians in or near where he lives in Hamilton, Ontario, Canada aside from bassist Dylan Godfrey. Tamberelli did not let that deter him from his goal and he recruited musicians from all over the world — singer Raphael Gazal (Brazil), drummer Mike Vecchione (New York city, New York, USA), keyboardist Marco Gnoatto (Argentina) and singer Chris Catton (Denmark).

Although Armageddon Roxx definitely have an international flavour to them with their line-up, they sound more like a hybrid of American classic rock meets ’80s hard rock with some strong production.”