Armored Saint‘s well respected bassist Joey Vera was recently interviewed by Eon Music and asked about his time in Anthrax back in 2004-05. 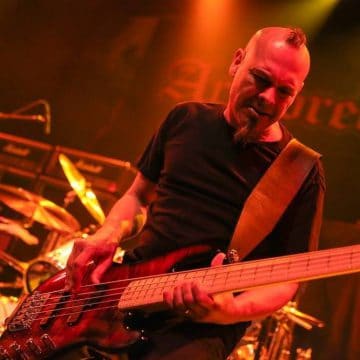 With respect to whether he ever was a full-on member of the group, Vera stated: “No, I was filling in. It was pretty clear that Frank [Bello, Anthrax bassist] needed a break from everybody, and he needed some outlet, which he did with Helmet. So he did a tour with Helmet during that same time, basically. No, it was always clearly I was filling in for him. It was exactly a year; it was like April to April, it was weird.”

In regard to whether he was surprised to get that call to go play with Anthrax, Vera replied: “Yeah, I was. I didn’t even know what was going on or anything, but shortly before I got the call, John [Bush] made me aware of what was going on within the group, and he told me that Scott [Ian, Anthrax founder] had asked him; “Hey, do you think that Joey might be interested in filling in?”, so I was like; “Yeah, of course I would!” Luckily, it just so happened that I had that year pretty much open, so it just worked out perfect.”

Vera also commented about playing with Anthrax when he stated: “I’ve known the Anthrax guys since the mid to late eighties; I was a fan of the band, so just to be in the band, even playing on stage, it was pretty amazing. But then to look over and there’s my best friend from childhood and from Armored Saint, and he’s the lead singer; the whole thing was pretty surreal. So, I had a blast. That trip, that whole year was great. I basically did the world; we did ten shows in Japan, which I’d never been to, we did Australia which I’d never been to, I did a whole tour of Europe, did all these great festivals, we did a tour of the US, and then we did South America, which I’d never been to. We basically did all the territories, and that was amazing for me.”
​
In terms of recording with Anthrax, Vera advised: “The only thing I did was I worked with John and I recorded all of his vocals at my studio for ‘The Greater Of Two Evils’. We did all the vocals at my house, so him and I got to work together [on an Anthrax record]. It was great, and then about a year later they had another thing where Frankie couldn’t do it. They did a festival in Montreal, Canada, and I filled in for that. So they occasionally call me back. When Charlie’s mom passed away, Frankie’s grandmother, I went and did a week of dates with them in the States. So we’re all on really good terms, and it’s cool.”

You can read the rest of the interview with Vera at Eon Music.

Anthrax with Joey Vera in the line-up at Rams Head Live:

Even thou Charlie and Frank weren’t here at this show. Anthrax didn’t miss a beat. Gene Hoglan on drums and Joey Vera on bass. Stellar performance by both th…