Armored Saint lead vocalist John Bush was recently interviewed by 69 Faces Of Rock and spoke at length about his time in Anthrax but also about being asked to join Metallica back in the early 1980s. 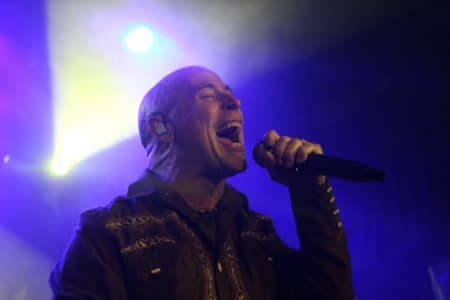 Bush stated as follows about the latter (as transcribed by Blabbermouth with slight edits):

“I think that at the time, James [Hetfield] was still uncertain whether he wanted to be the singer of the time. [It was] before ‘Kill ‘Em All’. He was unsure. They asked me, but at the time, Armored Saint — Joey [Vera], Gonzo, Phil [Sandoval] and myself, we’ve known each other since we were eight years old. Armored Saint was starting to do really well on the L.A. club circuit, and we were all friends — best of friends. Metallica was doing well too, but I don’t think anybody envisioned what was going to happen. For me to leave my band of friends to join some other band, it didn’t make sense to me. I didn’t want to do it. Certainly I was grateful and honored, but I always say, ‘I was not meant to be in Metallica. That was not my destiny.'”

Interview with John Bush by 69 Faces Of Rock:

Vocalist John Bush recalls his time fronting Anthrax. Bush talks about each album and the overall experience. John Bush is not re-joining Anthrax, this is …

Metallica performing “The Four Horsemen” with John Bush at The Fillmore in San Francisco, California, USA on December 7, 2011: