Armored Saint consisting of lead vocalist John Bush, guitarists Phil Sandoval and Jeff Duncan, bassist Joey Vera and drummer Gonzo Sandoval have released a video for their single “Lone Wolf” from their latest album Punching The Sky, which has been available via Metal Blade Records since October 23, 2020. 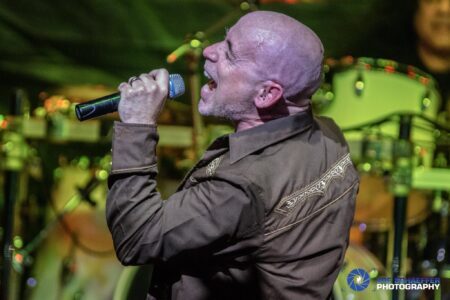 Punching The Sky landed the #7 position on the Sleaze Roxx Readers’ Top 20 Albums of 2020 to which Sleaze Roxx stated:

“Armored Saint land the highest finish on the Sleaze Roxx Readers’ Top 20 Albums of 2020 with respect to an album that Sleaze Roxx has not yet reviewed. I must confess that I really liked Armored Saint‘s debut full-length album March of The Saint (1984) and to a lesser extent their follow up Delirious Nomad (1985) when they first came out but I kind of lost track of the band over the years. Many years later, I got into Symbol of Salvation (1991), which is another great record. However, subsequent albums such as Revelation (2000), Win Hands Down (2015) and the new one Punching The Sky (2020) didn’t spur me on into discovering or re-discovering the band’s discography but clearly many Sleaze Roxx readers are digging what Armored Saint have to offer lately. With John Bush‘s ageless vocal delivery and a line-up that’s been together for more than three decades (minus two periods when the group was on hiatus), one can only hope that we don’t have to wait another five years for Armored Saint‘s next studio album. For now, Armored Saint land their highest finish on a Sleaze Roxx readers’ year end list as La Raza didn’t even crack the Top 20 in 2010 while Win Hands Down landed at #11 in 2015.”