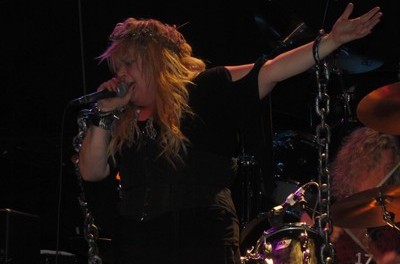 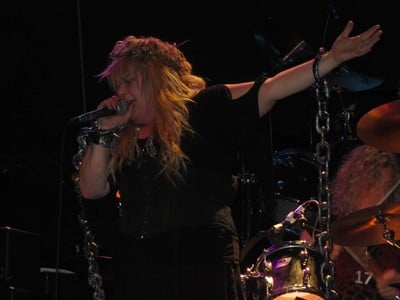 Aron Cross are a fairly new band that originates from a group called Revelation 17 that Sleaze Roxx saw in concert back in December 2014 while the group opened for the incomparable Sebastian Bach. Sleaze Roxx stated the following in its concert review: “I had never heard Revelation 17 before but knew that lead singer Jacqueline Lovely had been around the scene for quite some time. Her band hailed from Barrie, which is about one hour north of Toronto… The highlights of their set for me were their cover of Black Sabbath‘s “Heaven And Hell” and the original song (for which I do not know the name) [which turned out to be “Harlot Of Babylon”] that followed. One rather cheesy portion of the band’s set occurred during the last song when Lovely sported a Jesus crucifix crown and had chains from her wrists to the drum kit while singing at least part of the song. Revelation 17‘s original songs were alright on a first listen and overall they put on a good performance and definitely had some fans out in the audience.”

Aron Cross‘ origins are outlined in the group’s Facebook page as follows (with slight edits): “As a hard-hitting rock band, Aron Cross believes that providing audiences with dynamic and visually stimulating live show is just as important as the music they create. So you can be sure that whether you see them as headliners or in a supporting band role, Aron Cross will always deliver an electric performance that will have your eyes glued to the stage; see them once, love them forever.

Lovely independently released her first EP Love Me in July 2012, which was the last time her and Duo partner Vince Marcheson would record together. With family priorities increasing, Marcheson left music and Lovely began touring solo with hired musicians under her own name, Jacqueline Lovely, and the band name, Revelation 17… In November 2013, Lovely introduced Serge Wisotzky as the first permanent member of the blossoming project. She independently released un-mastered mixes of the songs “Unchained” and “Harlot Of Babylon” during the Revelation 17 tour in 2014. As new radio spins and live performance royalties began coming in, Lovely and her co-writers began recording the bands first full length CD, Warriors of Truth. With a new album on the horizon, it was time for a permanent band name and new branding that was more in keeping with the personality of the band and Lovely‘s vision for a historical “viking” look and feel.