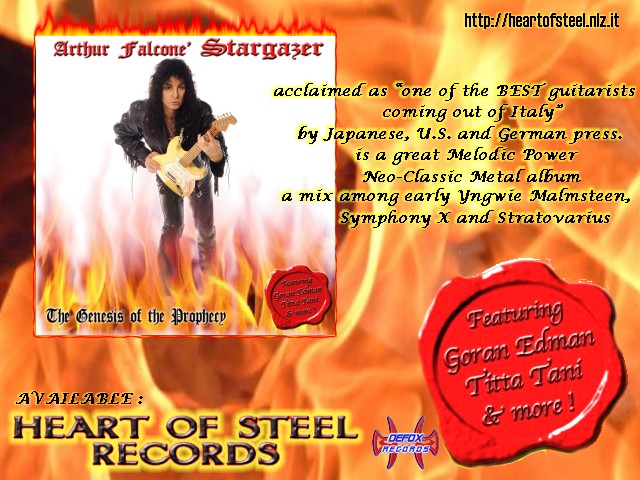 ARTHUR FALCONE’ STARGAZER RELEASES “THE GENESIS OF THE PROPHECY”:

Arthur Falcone has been acclaimed as “one of the BEST guitarists coming out of Italy” by Japanese, U.S.andGerman press; his previous musical experiences have been in Hard-Rock bands like HALLOWEEN, DEVILS CLAWS, FOXY LADY and LAROXX.

Falcone has been a guitar teacher at “The House Of Music” in Trieste for years now, and LUCA TURILLI of Rhapsody-fame has been one of his students!!!Arthur Falcone’s style has been strongly influenced by 6-strings masters like Ritchie Blackmore, MichaelSchenker, Eddie Van Halen, Yngwie Malmsteen and Steve Morse as well as bands such as Rainbow, Deep Purple, Loudness and Rush. Falcone shared the stage with artists like artists like Deep Purple, John Lawton Band (Uriah Heep), Kiko Louriero, Ian Paice, Vinnie Moore, Andrea Braido & more.

“The Genesis Of The Prophecy” is a great Hard Rock / Melodic Metal album, with many neo-classical influences,with a style that might be described as a mix among Rainbow, early Yngwie Malmsteen’s Rising Force and Symphony X!Great production and a fantastic artwork with a full-colour 16 pages booklet.