Atlanta, Georgia, USA based rockers Asphalt Valentine have announced that they have a new guitarist by the name of Victor Adriel. 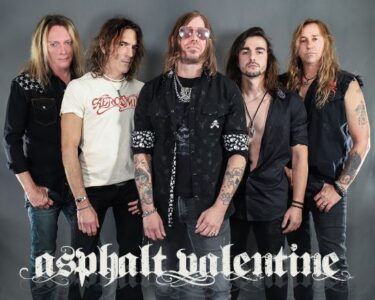 “Hailing from São Paulo, Brazil, Victor joined the band just a couple of weeks ago and is ready to hit the road for all the upcoming shows. We are super stoked to have him a part of the AV crew!

Vocalist Joe Flynt states: “The whole band is excited that we released another record. It’s been years or since we did the ‘Into The Red’ E.P. and a lot has changed with the band. We almost called it a day a while back but then I got a call from another band from the area to fill in on vocals. While I was out on the road with them, my creative energy started to flow again. When I got back from the road, I was so fired up and ready to get back at it I called the guys up and we started to finish writing and recording Twisted Road. It all came together pretty quickly once everyone was back in band mode. I feel like we’ve put together something really special, and I’m looking forward to hearing what the fans think about it. We’re all so proud of this album. It’s definitely a big jump from our previous efforts and the material is so much stronger now and adding Victor has made all of us step up our game.”

Asphalt Valentine is based in Atlanta, GA and got its start in the early 2000’s. They signed with Chavis Records, now HighVolMusic, and released their debut Strip Rock Roll in 2008. The band toured the U.S. with Mama Kin from Sweden on the ‘Summer of Sin Tour’. In 2013, the band self-released their ‘Into The Red’ E.P. as well as released a video for the track “Living Dreams.” In 2015, the band  began working on what is now Twisted Road and released a video for the track “The Only” before going on hiatus. “The Only” was originally conceived when the band was approached by author/film maker/adventurist Joey Shonka to write some music for one of his documentary-style films. Shonka, a life long friend of vocalist Joe Flynt, specifically wanted something to accompany his latest movie about his years long journey across the entire Andes Mountains range in South America – a journey he did alone. “The Only” conveys the physical and emotional toll of isolation, endless perseverance, and the spiritual connection one must make within themselves to strive onward in one of the most formidable environments on planet Earth. The video contains footage of the recording sessions as well as clips from Shonka’s latest self-shot movie The Shonkadventure.”