Atlanta, Georgia, USA rockers Asphalt Valentine featuring lead vocalist Joe Flynt (who earlier in the year was a temporary fill-in singer for Kickin Valentina) have signed with HighVolMusic and will be releasing a new studio album in the summer of 2019. 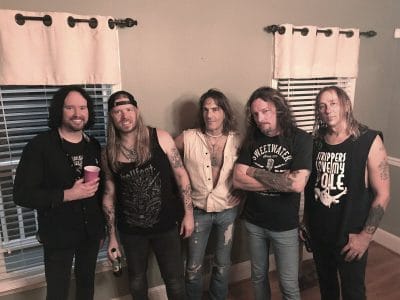 “Atlanta rockers Asphalt Valentine are working on a new album to be released during the summer of 2019. AV is currently recording at ‘Dirty Little Secret Studios‘ and working again with producer Andy Riley and Muse Productions. The band recently signed with the Maryland based independent label HighVolMusic.

The new album is the follow up to self-released EP ‘Into The Red’. “Asphalt Valentine has been on a bit of a hiatus. We’ve taken some down time, wrote some new material and reassessed where we’re at as a band. It wasn’t until I filled in on a few gigs for our friends in ‘Kickin Valentina‘, that the creative energy was sparked. Now we are in full rock mode” says vocalist Joe Flynt.

A video for the track ‘The Only’ was released and is a taste of what’s to come. Asphalt Valentine released their debut ‘Strip Rock Roll’ in 2009 on the Chavis Records/Jamsync imprint label which garnered some minor success.

Details on the new album are forth coming as well as plans for shows in the new year.”