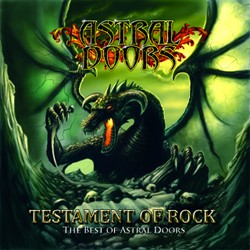 In early 2002, Swedish guitarist Joachim Nordlund and drummer Johan Lindstedt teamed up and decided to write some metal songs in the spirit of the old heroes Rainbow, Dio, Sabbath and Deep Purple. Nils Patrik Johansson, an old time friend with Johan, was asked to do the vocals in the project. Nils Patrik accepted the offer and ASTRAL DOORS was almost a reality.

Joachim asked his former band-mate Jocke Roberg, if he wanted to join, and a handshake later the band had a keyboardist. Martin Haglund from “Universal Puppies” was asked to fill in on the bass. However, in early 2003 Martin moved onto the guitar, to provide the band with a real dual guitar attack sound, and into the line-up came Mika Itaranta as bass player. ASTRAL DOORS was born…

They completed the recordings of their debut-album (mixed by Peter Tagtgren at Abyss Studio) and began working with Danish based metal-agency Intromental Management. Deals were locked down for “Of The Son And The Father”. The band caught immense media attention, with fantastic reviews everywhere, and various festivals were not late to book ASTRAL DOORS. The band performed at Wacken Open Air, Sweden Rock Festival and Decibel 2000 during the summer of 2004, gaining an impressive number of new fans.

Not resting on the laurels of their success, ASTRAL DOORS finalized their 2nd opus “Evil Is Forever” very quickly and the album was released by the same labels as the debut album. The release, which once again received amazing media and fan support, was followed by an extensive European tour as support act to German metal-gods Grave Digger, as well as several festival gigs in Sweden, and not to forget a successful gig in Germany with the hard rock princess herself, Doro Pesch.

After several released albums they wanted to show their whole wide range and decided to roll out their first Best of Album, which was arranged by the fans.

For fans and beginners the roundup of all favorite tracks will be released on January 25, 2011. The Best Of will be completed with the previously undisclosed song named Victory.

TESTAMENT of ROCK is the next step of ASTRAL DOORS history.