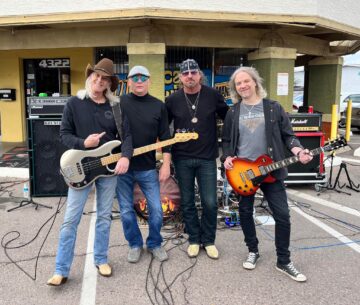 “Atomic Kings to release their debut album through ToneHouse Records. Featuring Greg Chaisson formerly of Badlands and Red Dragon Cartel, Ken Ronk on vocals, Ryan McKay on guitar and Jimi Taft on drums to create the thunderous sound that is Atomic Kings.

Atomic Kings will be hitting the studio in May 2022 to record a full album of brand new songs that lay heavily in hard rock / blues based sounds of the 70’s and 80’s. “Atomic Kings doesn’t sound like anything, but then again it sounds like everything that we love about the hard rock of the 70s and 80s with our own special twist!” The band is currently looking towards hitting a fall 2022 release.

“Why ToneHouse? Because for Atomic Kings, it was the first time we had finally heard the sound from a studio that we had been looking for. We also like their no nonsense, artist-first approach. It’s a refreshing change from your average record company.”

Founded in 2020, ToneHouse Records was started by Jason Constantine along with Jeff Duncan (Armored Saint / DC4) as a label dedicated to getting the artists the most bang for their buck. They sign bands to single album contracts that lay heavily on making sure the artist gets the majority share of their music sales.”