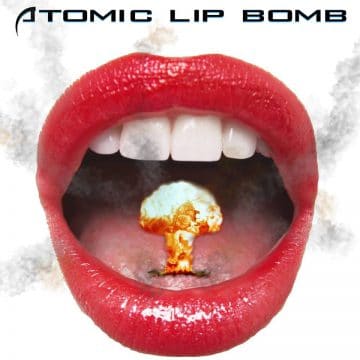 Atomic Lip Bomb‘s “Story” on their Facebook page states: “Still believing in what hard rock used to be? So are we! We are Atomic Lip Bomb from the USA. Made up of has beens, throw aways and misfits from a bygone era, we believe in what makes music fun. Sex, drugs and rock and roll baby! Hollywood Glam is alive and well….sort of.”

The band’s “Biography” on its Facebook page states: “ALB was initially formed as a studio, project style recording band. The music is geared towards the throwback sounds of recycled, 80’s glam & hair metal. SQUIB KICK RECORDS realized there is a huge underground fanbase and crowd of hard rockers who still enjoy the “party rock” style. So they eagerly took an interest in what was developing and decided to give ALB a chance at doing something not a lot of other bands were doing anymore. “It’s not to be taken too seriously”, says Atomic Lip Bomb. “Just like other fun rock acts such as: Steel Panther or Klassik ’78, it’s more of a TRIBUTE to the history of hard rock. We just want to record and have fun with it. Give the fans and our friends something to listen to and enjoy when they get burned out on their old favorites!” IT’S LIKE NEW NOSTALGIA!”