Adelaide, Australia based glam rockers, Laced In Lust, are set to embark on a tour of Europe that will see them play in nine countries within 23 days. 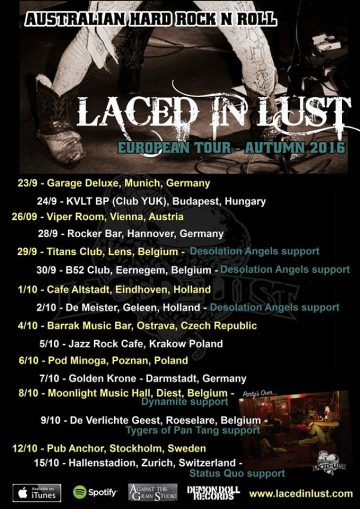 Speaking exclusively with Sleaze Roxx, Laced In Lust‘s frontman Torsten Steel was asked how long the group’s latest European tour has been in the works and how difficult it is to coordinate it from Australia. Steel replied: “We were at the drawing board straight after our last European tour in 2014, but travelling to and from Europe from Australia, as most people will know is quite expensive and the band took a massive financial hit with the tour costs. Ourselves also took a big hit with loans we took out to do the last trip and to buy and store all our equipment over there as we knew we would be back again. Otherwise it got shelved until about nine months ago when the band was going a little too stale for our liking. And with us about to go in and record, we started the ball rolling again. Otherwise, I didn’t start the booking until about seven or eight months ago.

Laced In Lust do everything independently. We don’t have a label or any promoters to pay for us, so for us to find bands, venues, sound engineers or anything is quite hard. I think I sent out about 1,500 emails to get this tour to where it is. I can say most don’t reply to us or don’t want you on as you’re from Australia or hard rock and glam isn’t the in thing in that country. Our 2014 tour was very hard to book yet we managed to get 10 shows in six countries over six weeks. So we spent more time having a working holiday than playing, but the shows went better than we expected.

This time was much easier than last but still hard. We managed to get 16 shows in just under four weeks and somehow popped a Status Quo support and a Tygers Of Pan Tang support, not to mention three dates with Desolation Angels and a date with 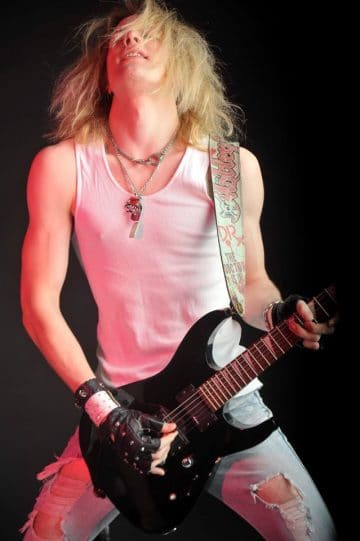 Dynamite. A few of the venues and a few bands were all people we made friends with in 2014. So without their help, we would have been screwed. When booking tours from Australia, we pretty much rely on what we have done as a band in the past, the venue promoters to be over the moon that an Aussie rock band is coming, and for the venues genuinely being in love with glam themselves, and wanting a glam night with the very few glam bands they have in their own cities.”

In terms of how he would describe Laced In Lust‘s new EP Party’s Over, Steel stated: “This new EP Party’s Over really means the party’s just beginning for us. Our debut single “Fire” was us when we were first starting out, hungry, aggressive and highly sleaze rock. We like “Fire” if you can’t tell [laughs]. Our second “Firing Lines” was us really spreading our wings with the studio work as we all were getting better at our instruments and had learned a lot about ourselves and music with all of our Australian tours we were doing. So we ended up with a more sleazy Status Quo type of record instead of a Junkyard record like when we first started. But Party’s Over to me is just the perfect kick in the balls. I found our song writing and craftsmanship has improved a lot more, and we’ve got back down with a lot more grit and sleaziness again, especially with songs like “Lipservice” and the more heavy hair metal sounding “Black Heart Murder.” But still being able to write a classy more ’70s glam sounding Party’s Over.”

Steel was finally asked what he’s looking forward the most in regard to Laced In Lust‘s upcoming European tour to which he replied: “Good Question. For myself, I’d have to say Status Quo would be my highlight. Without them, I would have never picked up a guitar or fallen in love with music like I have. Otherwise, I would have to say on behalf of the band, the whole tour in general really. To play in different countries to different people, try out new foods and beer. Make new friends and find new bands to listen to and keep the glam rock ball rolling as I find it’s a struggling genre. The people who are a part of and support the glam/sleaze/metal scene are the best people in the world. So supportive and caring. We just gotta convert those Justin Bieber fans who don’t know what real music is [laughs].”