Australia based heavy metal rockers Elm Street have released a lyric video for their new song “Kiss The Canvas” from their new album Knock ‘Em Out With A Metal Fist, which is to be released soon or perhaps has already been released via Massacre Records. 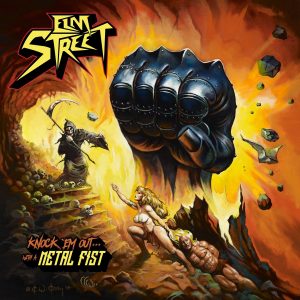 “Having been an active band since 2003 and taking worldwide stages by storm after their Massacre Records debut “Barbed Wire Metal” in 2011, Elm Street return with their 2nd full length album and this time their music packs a metal punch.

Knock ‘Em Out…With A Metal Fist is due to be released in June 2016 via Massacre Records & Firestarter Distribution (Australia only) and features years of hard work, dedication that has shaped the band into a leading force in the heavy metal genre.

Years have passed and the years have seen Elm Street tour Europe on multiple occasions, along with visits to the USA & their home country of Australia with bands Iced Earth, Sepultura, Coroner, Accept, Tankard & Hammerfall.

These real life experiences along with many others has painted a strong sound which Elm Street now showcase in their new album. 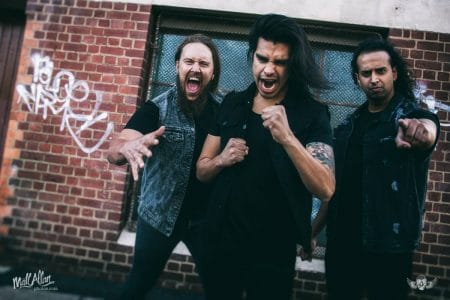 Australian & European fans received a glimpse of the new album when the band took their “Heart Racer EP” on the road during 2015.

This excitement was felt by many and led to Elm Street renewing their album deal with Massacre Records, signing a new deal with Firestarter Distribution and focusing on the release of “Knock ‘Em Out…With Metal Fist”.

The new album again features production by Ermin Hamidovic from Systematic Productions (Barbed Wire Metal) and features iconic artwork by Ken Kelly who has only worked with a handful of bands such as KISS & Manowar.

Words are only words but if heavy metal is your genre of choice OR you’re in need of some energetic music then “Knock ‘Em Out…With A Metal Fist” will be spinning on your record player for years!

This song is taken from the album KNOCK EM OUT…WITH A METAL FIST which you can get here:https://open.spotify.com/artist/7GZ2pCmZ6H5vrdfB41vCoy( Elm Street …