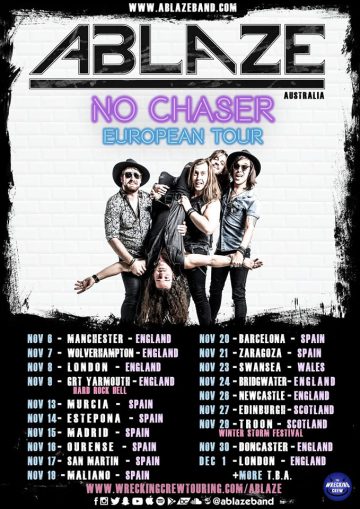 “Ablaze was originally formed by a group of mates, fresh out of high school and wanting to belt out some riff-driven Aussie pub rock’n’roll. After jamming on covers for a couple of weeks, the young blokes quickly became bored of playing other people’s songs, and the desire to write originals grew quickly. Putting together a set’s worth of material (with a few of their favourite old AC/DC and Screaming Jets covers to boot), the boys begun cutting their teeth on any stage that would take them. Soon after, Ablaze began gigging hard around town; from Friday night pub gigs and opening sets at dive bars to local festivals and headlining the renowned Espy Gershwin Room, the boys set out to hone their on-stage skills, all the while pumping out more original tracks as they went.

Ablaze record their first single, ‘The Hard Way’, late in 2014 and both the track and accompanying film clip catapulted them onto the radar of the Australian music scene. Armed with a killer live show brimming with energy and a good soaking of beer and Jägermeister, Ablaze spent 2015 gigging hard around Melbourne, and by the end of the year they were back in the studio recording an EP. The ‘No Turning Back’ EP was released April 1st 2016 with a bang at the Elephant & Wheelbarrow, St. Kilda to a packed room, and with the trademark live show jumping to a new level, the EP and single ‘Pick Your Poison’ fuelled the band’s first interstate tour encompassing Adelaide, several NSW shows and a whole swathe of regional and metro appearances as well.

After opening up 2017 supporting none other than The Screaming Jets, 2017 saw Ablaze gigging harder than ever. The mini-EP/DVD pack ‘Two’s Up’, which featured the rockumentary ‘AblazeTV’, was released and followed up by a mini-tour including some regional and interstate dates again. After this, the boys locked themselves away to finish off writing their debut album, but managed to share the stage with Marky Ramone before the year was out.

Kicking off 2018 with a slot on the hugely successful ‘Under The Southern Stars’ tour alongside Jimmy Barnes, Richie Sambora, Orianthi, Diesel, Richard Clapton, Ash Grunwald and Dallas Crane, this already looks set to be the biggest year yet for Ablaze, heading in to record their debut album at Lighthill Studios (set for release mid-year) and touring far and wide. Prepare you livers, and hold on tight!”