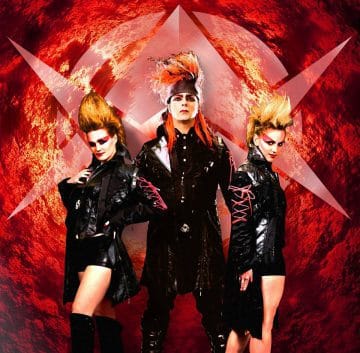 The New Wave of Hair Metal contributor Abishen recently interviewed Australian glam melodic rockers Crosson‘s guitarist / singer Jason Crosson. Abishen reported as follows: “Crosson will be preparing for a new album release next year which is titled “Invinsible“. Once again mixed by Duane Baron and the videos are directed by Steve Ravic (who has worked on videos for Manowar, Doro and the Poodles etc).” The new record will follow Crosson‘s latest studio album Spreading The Rock N’ Roll Disease.

In terms of how Crosson got started, Jason advised (with slight edits): “Paul Stanley once said that he wanted to put together a band that he wanted see. So , I wanted to see theatrics, a great look and sexy girls on stage, blended with catchy sing along rock tunes hence Crosson came to be.”

With respect to Crosson potentially changing their sound in the future, Jason stated (with slight edits): “Crosson is about catchy, melodic rock tunes. I really have no interest in experimenting in anything else to please the critics. Hell…. AC/DC has done it for 40+ years. If its good enough for the biggest rock band on the planet, its good enough for us ?  I prefer to write songs that stick in peoples heads that they can sing along to.”

You can read the rest of the interview with Crosson guitarist Jason Crosson at The New Wave of Hair Metal‘s Facebook page.

Crosson‘s “Rip Out My Heart” video:

CROSSON – Rip Out My Heart

‘Rip Out My Heart’ by Aussie Theatrical Rock Warriors CROSSON. From the album “Spreading The Rock N’ Roll Disease”