Following Sleaze Roxx‘s announcement on April 11th that former Autograph drummer Keni Richards passed away on April 8th, Autograph guitarist Steve Lynch confirmed that his former bandmate passed away. Richards was 60 and the cause of his death has yet to be revealed. 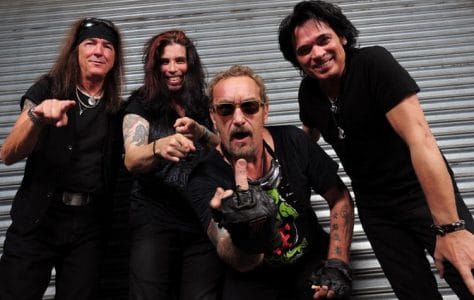 The following message was posted on Lynch‘s Facebook page on April 12, 2017:

“Very Sad news today my friends. I just got confirmation that Keni Richards, our original drummer and cofounder of Autograph has passed away. He was the mighty force that was our backbone from 1983-1988. We wish him a pleasant and peaceful journey. Our love and condolences to his family and friends. He will be missed greatly…”

In early 2014, Richards had rejoined bandmates Lynch and bassist Randy Rand as they resurrected the Autograph band with new singer and former Jailhouse frontman Simon Daniels. However, Richards‘ time in the band was short-lived as he either bowed out due to health issues or as per Metal Sludge, got fired.

Richards had turned to arts along the way and had a Facebook page dedicated to his artwork, which was set up by his friend Mike Collins. The following message was left on the Keni Richards Art Fan Page Facebook page on April 15, 2017:

“I know everyone that has come to Keni Richards art page , is probably to pay your respects . I am sure some of you knew keni very well and some may be through his love of music and art . How you knew Keni doesn’t matter here on his Art page . I appreciate the numbers of you being here . I have some control of his page as he wasn’t sure how to set it up . I will miss my good friend and have a hole in my heart for him . Thank you all … Mike Collins“

Autograph’s members talked about the reunion and Plunkett. RIP Keni