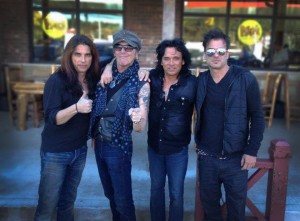 American hard rockers Autograph have just made the following announcement on their Facebook page:

“Happy to announce we have finished recording our new EP! New music coming your way very soon! Tomorrow night we will unveil the album cover, track-listing, and details on the CD-release party! Stay tuned!”

Autograph are best known for their hit single “Turn Up The Radio” from their debut album Sign In Please released back in 1984. The group released two more albums (That’s The Stuff and Loud And Clear) before the band members went their separate ways in 1989. Lead singer Steve Plunkett later resurrected the band before it eventually disbanded in 2005.

Sleaze Roxx’s Bio on Autograph states: “In 2011, original band members [Steve] Lynch and [Randy] Rand reconnected at a NAMM convention and decided to reform the group. With Plunkett too busy with his own business but providing his blessing for the band to continue, Lynch and Rand recruited original drummer [Keni] Richards and Jailhouse singer and guitarist Simon Daniels for a revamped more guitar oriented Autograph line-up. Richards had to bow out due to health issues and drummer Marc Weiland joined the band. Since the beginning of 2014, Autograph have been touring once again including playing a number of festivals such as the M3 Rock Festival in 2014, Firefest in 2014 and Cathouse Live in 2015. The new line-up has released three singles in 2015: “I Lost My Mind In America,” “You Are Us, We Are You” and “Every Generation.””