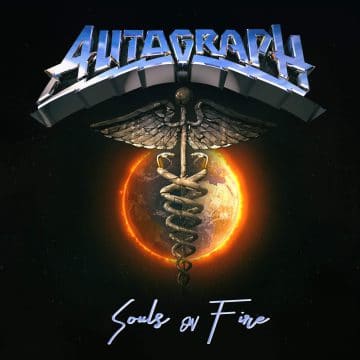 Autograph consisting of bassist Randy Rand, lead vocalist / rhythm guitarist Simon Daniels, drummer Marc Wieland and lead guitarist Jimi Bell have released a static video for their new single “Souls On Fire” which is the first with Bell in the line-up.

Back in late August 2019, Autograph announced that Bell would be replacing long-time lead guitarist Steve Lynch who elected to leave the band in July 2019 to explore new musical ideas with his fiancé Alena Rae.

The following message was posted on Autograph‘s Facebook page yesterday (with slight edits):

“Check out the new Autograph single “Souls On Fire”, with an amazing static video from Melody Myers of Designed By Melody!! Download it today on Bandcamp, and a portion of the proceeds will go to Trinity Health Of New England, to support their frontline health-care workers!”

Autograph‘s Bandcamp page indicates: “Souls on Fire, the new single from Autograph! A portion of all proceeds go to Trinity Health of New England, to support frontline health care workers in the fight against Cover-19!!”