Autograph release video for “Every Generation” 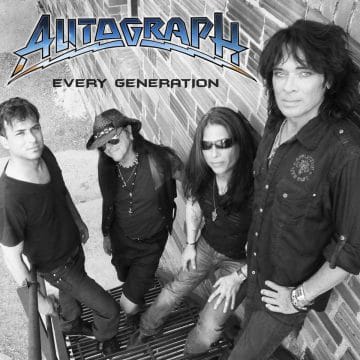 Autograph featuring original members Steve Lynch (lead guitar) and Randy Rand (bass) along with Simon Daniels (singer/guitar) and Marc Wieland (drums) have released a video for the song “Every Generation” from their latest studio album Get Off Your Ass, which was released via the EMP Label Group on October 6, 2017.

The video was directed by Paul Gervasi for Royal Rock Films.

The track “Every Generation” first appeared on Autograph‘s Louder EP, which was released in early 2016.

The group released a teaser video for the song (which is not available anymore) back in September 2015 and the band’s press release stated at that time (with slight edits): “This is our third single to be released this year with our new lineup. We released our first new single, “You Are Us, We Are You” back in January, and then in April came “I Lost My Mind in America.” We are very proud of the new music we are creating in this new chapter in Autograph‘s history, and hope you’ll all love this new song as much as we do.”

Official Music Video for “Every Generation” by AUTOGRAPH.From the album GET OFF YOUR ASS, in stores now from EMP LABEL GROUP.Directed by: Paul Gervasi for Ro…