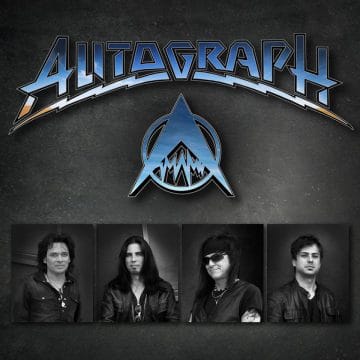 Autograph featuring original members Steve Lynch (lead guitar) and Randy Rand (bass) along with Simon Daniels (singer/guitar) and Marc Wieland (drums) have released a video for the title track from their upcoming new studio album Get Off Your Ass, which will be released via the EMP Label Group on October 6, 2017.

Says Lynch: “‘Get Off Your Ass’ definitely sets a new direction for the band, with an updated, heavier sound, while still retaining the signature melodic hooks people have come to expect from Autograph. This record is bound to get the attention of old Autograph fans as well as the new. So put your ears on and turn this one up!!”

Adds Daniels: “We are so excited about this record! This is a lineup of brothers with a vision and the perfect chemistry. We wanted the record to be musically timeless, and translate a heavier sound featuring the melodies and harmonies, but with heavier guitars and a more ‘in-your-face’ attitude. The lyrics come from the heart and are directed to people of our current era, with uplifting messages and positive energy. It’s Autograph on steroids.”

Autograph‘s “Get Off Your Ass” video:

AUTOGRAPH – GET OFF YOUR ASS – OFFICIAL VIDEO

Official music video for the new AUTOGRAPH single “Get Off Your Ass”.Directed by Paul Gervasi.From the forthcoming EMP LABEL GROUP LP GET OFF YOUR ASS, In st…