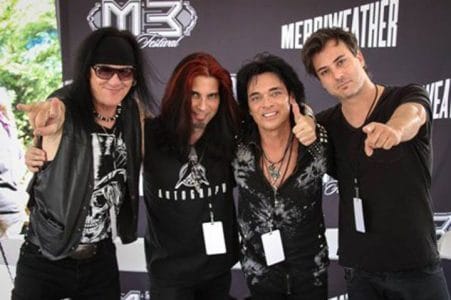 The band members were asked about the group’s new EP Louder released back in January 2016 to which Lynch stated: “Yes, the EP. Well, since we’re a new band, we wanted to put out what we sound like now and give them a taste of that. But, we’ve finished a full LP now and that is going to be released soon. But, we’re waiting for the right deal and so we’re shopping right now.” Daniels added as follows: “The Louder EP, we did it all ourselves and we want to attempt to go to the next level. We’re not in a hurry or anything, we’re just trying to do something that projects the songs in a higher way and to more people. So, you need a little help from other things and getting people interested. So, we’re talking to people.”

Weiland provided the following details: “Well, the record is going to be the five songs from the EP plus five new songs. I recorded and mixed everything…. I put everything together. It turned out amazing, it really did. It’s a big variety of songs. We have an amazing, killer ballad on there as well as a new single, which is called “Get Off Your Ass” which will get people to get off their ass. I’m really, really excited about it. It turned out really good.”

In terms of what the new songs will sound like, Rand stated: “A little bit of the old because we have the big choruses and stuff but it’s just new.” Daniels added: “It’s melodic, the lyrics are uplifting, we’re not going dark but we’re incrementing a little more timeless rock and roll vibe, guitar oriented. So, it’s new but certain elements are similar.” Weiland also added: “The formula stayed the same, basically.”

With respect to the new album title, Lynch announced: “It is going to be called Get Off Your Ass.”

You can read the rest of the interview at Shockwave Magazine.

The Full Loud And Clear Video