On January 7th, Autograph will host their CD-release party at the world-famous Whisky a GoGo on the Sunset Strip in Hollywood. A meet-&-greet will follow their performance, where the band will sign copies of their new release. Initially, “Louder” will only be available exclusively on AutographBand.com, and at the band’s live shows. 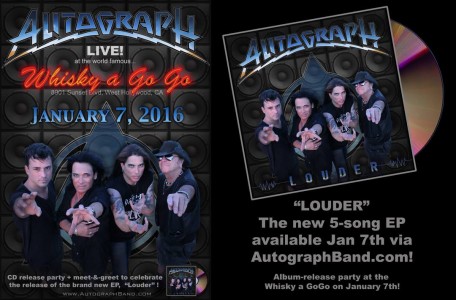 Autograph will continue to tour throughout 2016, with copies of “Louder” available at all dates!”

Of note, three of the five tracks on Louder have already been released digitally by the band throughout 2015 and one of the tracks is a live version of the group’s biggest hit “Turn Up The Radio.” It will be interesting to see how Autograph‘s EP Louder fares taking this into account and the fact there is only one unreleased song on the EP.