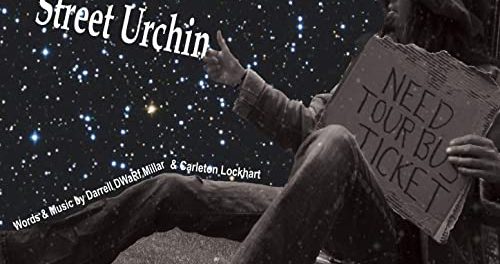 The following message was posted on Unkledunk Records‘ Facebook page on May 29, 2020: 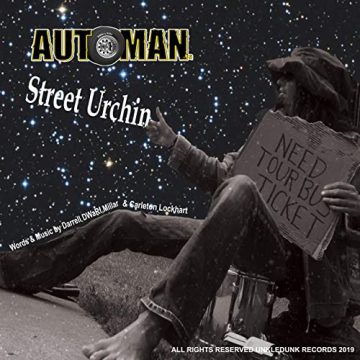 “World Premiere. Automan.ca Street Urchin. Our lives have changed with the Covid-19 era. Give aid to your local Opioid, Homeless, and Mental Illness institutions in your city. They need it. Megaforce Records #UnkledunkRecords“

Automan.ca‘s “Biography” on their Facebook page indicates in part (with slight edits):

“Automan.ca was formed by writing partners Darrell “DWaRf” Millar (vocals) and Carleton Lockhart (guitar) — a pure, 70’s/80’s influenced kick-ass ‘rawk’ band in the spirit of Aerosmith, The Rolling Stones, AC/DC, among others. Their distinctive, upbeat brand of modern classic rock can best be described as coming straight out of a time capsule, yet it’s altogether fresh, current and timeless.

Darrell is internationally renowned as the former drummer for the multi-million selling hard rock act Killer Dwarfs, as well as for Nikki Sixx-produced southern rock act Laidlaw. As one of the most high-profile and well-travelled drummers of the 80s-90s hard rock era, he’s shared concert stages worldwide with Iron Maiden, Motley Crue, ZZTop, Pantera, Lynyrd Skynyrd and several others. In forming Automan, he abandoned the drums for frontman duties. It’s his high-energy, ‘welcome-to-the-party!’ persona that fuels Automan‘s performances both live and on record.

Carleton has been mesmerizing musicians and fans alike for years with his unique style of playing pick-less, left-handed and upside-down. Those who witness his stellar performances are astounded. Undoubtedly, Carleton‘s incomparable approach to guitar is a key ingredient of the Automan.ca sound.

Automan.ca is rounded out with bassist John Fenton and drummer Adrian Cavan. Touring extensively throughout North America has polished the band into a tight, highly entertaining professional act. Via thousands of hits to the band’s various websites, they’ve amassed both local and worldwide recognition, which led to a successful run of Automan’s 2009 debut “Pocket Change”.”