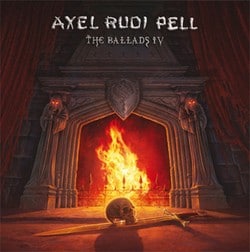 Axel Rudi Pell’s ‘The Ballads IV’ will be released as a standard version and digital download in North America through SPV/Steamhammer on September 27th.

Here is a short introduction by Axel himself to every new song in the specific running order:

“Where The Wild Waters Flow” — “My own composition in the true ARP ballad style. This song is not about love, it has a more mysterious content and it captures the long and hopeless journey of human beings trying to get away from some dark nights. One can apply this to many different thoughts and situations nowadays. I definitely think that this song is one of the strongest ballads I’ve ever written with a hookline that will stick to everyone’s ears!”

“Holy Diver” — “As everybody knows, my soul mate and friend Ronnie James Dio sadly passed away last year. It was very clear to me I needed to use one of his songs to pay him tribute. It had to be a song, which was very easily recognizable as one of his tunes and therefore I picked “Holy Diver”. Of course the original track isn’t a ballad, so I decided to re-arrange the song completely and we made a Piano version out of it, featuring some Orchestra strings, a Cello and a clean and melodic guitar solo. Johnny gave his very best vocal performance and after the track was finished, there were lots of tears in some eyes…”

“Hallelujah” — “At least one of the best ballads around. Originally written and released by Leonard Cohen in 1984, it wasn’t his version giving me the idea to cover this tune. Actually it was all the good and bad performances of some TV casting show participants who gave me the real kick to create one of the, hopefully, ultimate versions of this song. We recorded a children’s choir for this, which fits perfectly to Johnny’s emotional and soulful voice. There are two different versions of this track: the CD album version which features a slightly wilder guitar solo and the ‘Single’ (and downloadable) version which features a calmer guitar solo.”

“Where The Wild Waters Flow”, “Holy Diver” and “Hallelujah” were recorded, mixed and co-produced by Charlie Bauerfeind at Twilight Hall Studios in Grefrath, Germany, in May 2011. The CD was mastered by Ulf Horbelt at DMS Mastering Studios in Marl, Germany. The cover illustration was created by Martin McKenna. ‘The Ballads IV’ release dates; September 23rd in Germany, September 26th in Europe and September 27th in the USA and Canada.

For more information on the Axel Rudi pell band visit www.axel-rudi-pell.de and www.spv.de.