After having a very consistent line-up for many years, Babylon A.D. are experiencing all sorts of band line-up changes as the group has just announced today that Nick Hernandez will be replacing Marc “Spyder” Webb after the latter’s “swift departure.”

Babylon A.D. had previously announced that Webb was the replacement for long-time guitarist Ron Freschi back in early July 2019. 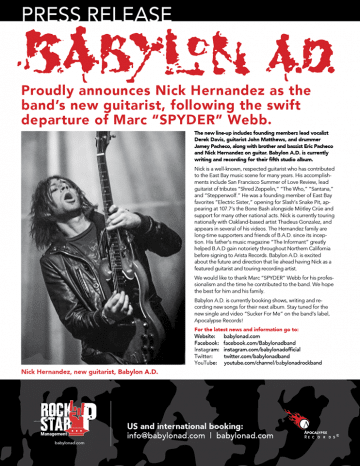 Nick is a well-known, respected guitarist who has contributed to the East Bay music scene for many years. His accomplishments include San Francisco Summer of Love Review, lead guitarist of tributes “Shred Zeppelin,” “The Who,” “Santana,” and “Steppenwolf.” He was a founding member of East Bay favorites “Electric Sister,” opening for Slash’s Snake Pit, appearing at 107.7’s the Bone Bash alongside Mötley Crüe and support for many other national acts. Nick is currently touring nationally with Oakland-based artist Thadeus Gonzalez, and appears in several of his videos. The Hernandez family are long-time supporters and friends of B.A.D. since its inception. His father’s music magazine “The Informant” greatly helped B.A.D gain notoriety throughout Northern California before signing to Arista Records. Babylon A.D. is excited about the future and direction that lie ahead having Nick as a featured guitarist and touring recording artist.

We would like to thank Marc “Spyder” Webb for his professionalism and the time he contributed to the band. We hope the best for him and his family.

Babylon A.D. is currently booking shows, writing and recording new songs for their next album. Stay tuned for the new single and video “Sucker For Me” on the band’s label, Apocalypse Records…Stay Tuned!”