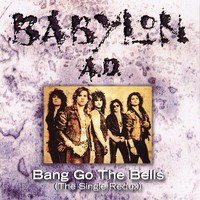 After a long hiatus, Babylon A.D. have regrouped with all the original members. The band is currently in pre-production mode for their sixth studio release. 2010 also brings Babylon A.D. full circle with a new, heart-pounding production of their #1 metal hit song, “Bang Go The Bells.” The newly recorded version has the same sense of explosive energy from vocalist Derek Davis, and the killer melodic riff made memorable by guitarist Ron Freschi. The re-recorded song’s monster groove is a powerhouse that takes off and never lets up. This is truly Babylon A.D. at their best.

“Bang Go The Bells, Redux 2010.” The new release from Babylon A.D., on Apocalypse Records and produced by Derek Davis and Ron Freschi at Hatrix Media, is available at CDBaby.com and iTunes.com.

For more information on Babylon A.D. visit www.babylonad.com and www.myspace.com/babylonadtheband.

Their self-titled debut album was released in 1990, and included their hard rock classic hits “Bang Go The Bells”, “Hammer Swings Down”, “Desperate” and “The Kid Goes Wild”. The latter song was featured in the trailer and music video for Orion Pictures’ Robocop 2. The band scored three number one songs at Metal radio and reached gold on their first release. Their sophomore effort, Nothing Sacred (released in 1992), produced two more metal rockers, “Bad Blood” and “So Savage the Heart.” Constant touring throughout the early 1990s, along with several MTV videos, made them one of hard rock fans’ favorites.

After spending several years with Arista, the band signed with Apocalypse Records in 1999 and released Live In Your Face, a compilation of live tracks recorded in various cities throughout the United States. The band’s next release American Blitzkrieg, followed in 2002, and both CDs were well-received by critics and fans alike. In 2006, the band released In The Beginning… on Apocalypse/Perris Records. The album featured songs from the original demo tapes that secured them their record deal with Arista Records.