Another change has occurred within the Babylon A.D. line-up as bassist Robb Reid is relinquishing his position to drummer Jamey Pacheco‘s brother Eric. Back in March 2017, it was announced that guitarist John Matthews was returning to Babylon A.D. and replacing Danny De La Rosa. 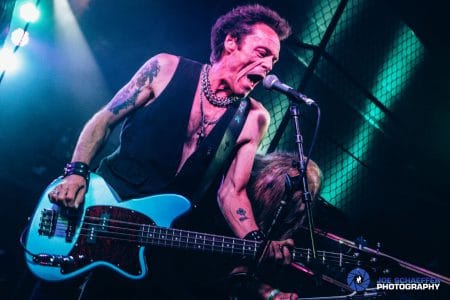 Babylon A.D. is proud to announce that Eric Pacheco, brother of drummer Jamey Pacheco, will take on bass, songwriting and touring responsibilities and will be appearing on the band’s upcoming album to be released next year. Eric has been in the B.A.D. family for years, first working as a guitar tech on the road in 89-91 and was invited into the band lineup in 2001 for the release of American Blitzkrieg. His songwriting capability and collaboration with Derek Davis contributed to three of the best tracks on that effort. Eric is an amazing musician/performer and together with brother Jamey, B.A.D. could not ask for a better powerhouse rhythm section to hold down the foundation of the music.

Robb Reid is taking a break from music and touring. The band would like to thank him for the friendship and professionalism he has shown over the years and his contribution to the band. It’s sad to see him go, but a change was needed within the machine for our next effort. Good luck Robb, we wish you well! Babylon A.D. is currently writing and demoing new songs for their next release on Frontiers Records SRL — Stay Tuned”

Babylon A.D. released their new studio album Revelation Highway back in October 2017 and it finished at #9 on the Sleaze Roxx’s Top Ten Albums of 2017 and #7 on the Sleaze Roxx Readers’ Top 20 Albums of 2017. Sleaze Roxx stated as follows with respect to that latter finish: “It’s great to see all these bands from back in the glory days (late ’80s / early ’90s) coming up with new material. One of these bands is Babylon A.D. who have unearthed some older material as well as come up with some brand new songs that make up Revelation Highway. While Babylon A.D. will likely mainly be known for their sublime debut self-titled album (1989) as well as their solid follow up Nothing Sacred (1992), Revelation Highway proves that these guys still have a lot of game. Then again, when your original frontman Derek Davis shows absolutely no signs of slowing down singing wise compared to many of his peers who have lost a step or ten when it comes to their voices, the band likely knows that it’s got the key element needed to rival its prior albums. The one difference this time around is that guitarist Danny La Rosa has been replaced by original band member John Matthews. Given that four of the ten songs on the album originate from the Persuaders / Babylon A.D. demos, it will be interesting to see whether Babylon A.D. will be able to successfully follow up Revelation Highwaywhen and if they have to rely only on new material.”