Babylon A.D. fans are one step closer to the hard rockers releasing a new studio album as the group just announced the title of its new record will be Revelation Highway and will be released in October 2017. 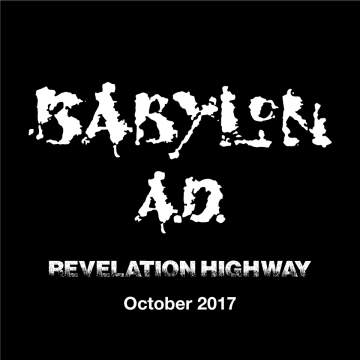 “Babylon A.D. is at it again. Following up their successful Release of 2015 “Live @ XXV”. The band is currently in the recording studio laying down tracks for their 6th full-length album. The new release is titled “REVELATION HIGHWAY” and is set for worldwide release in October 2017 on MBM Records! The band is will be playing new songs from the forthcoming album at all up coming shows US this Spring and touring in support of the record in the UK and Europe late this year. Stay tune B.A.D. fans and spread the word!”

Sleaze Roxx interviewed Babylon A.D.‘s frontman Derek Davis at the Rock N Skull Festival back on October 28, 2016 during which the singer indicated about Babylon A.D.‘s new studio album: “We are going to start recording in December [2016] or January [2017]. It’s probably going to take us eight weeks, nine weeks, to record the record and it should be out I’d say by September [2017]. That’s the date we are setting. September 1st — what would you call it? That’s the date that we are shooting for. And we’re supposed to deliver the record by June 1st [2017] so the material has already been written and it’s ready to go. We just got to get in the recording studio and record it. We’ve got the demo tapes all done and everything like that. Everybody’s just tightening it up. We start rehearsals for the record in about three weeks from now. Right before Thanksgiving, we start going into the studio, tightening up and getting the songs real tight. We’re looking forward to it!”

Davis went on to state: “We’ve actually been thinking about it for about two years. I’ve had quite a bit of songs that I have written myself. And Ron [Freschi] and Dan [De La Rosa], they’ve also had a lot of stuff that they have sent me over the last year or two. Yeah. We have been thinking about it for a couple of years. We wanted to see how the latest record came out — the ‘Live@XXV‘ — see how it peaked fans’ interest. So we kind of put it out there as a teaser — you know what I mean — to get everyone interested in the band again. This one is going to be really cool! We’re actually going to have some songs that we did on ‘In The Beginning.’ We’re going to have a few of those songs on there and we are redoing them like 25 years later or whatever. A lot of people asked us about that — badgering us — like “Man, you guys have to put out ‘She Likes To Give It’ or ‘I’m No Good For You’ but do it nowadays.” You know, let’s hear the sound now because we were just kids with an eight track and we didn’t know what we were doing then [laughs].”